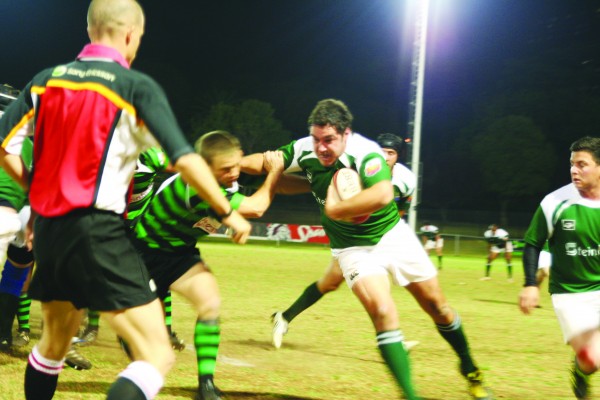 GLORY BOYS: An Engineers forrd brushes off a would-be-tackler. The Engineers were physical and the forwards provided the perfect platform to play knockouts rugby

Retribution for the winners. Bitter agony for the losers. But there can be no doubt the better team won.

The Steinhoff Engineers wrested back the inter-faculty rugby title from rivals the Steinhoff Humanities Titans after they won 20-0 in a physical encounter on Wednesday night.

The game was always going to be a tight affair, with the score line not quite reflecting how close the game was in the first half, with the key focus on which team could muscle up front with the forwards. The Titans’ strength lies with their backline play, and the Engineers went out with a game plan to restrict them.

It worked.They hit every tackle like men possessed and kept the game tight. The Titans could not get the go-forward ball that any backline needs.

At half-time there were a few walking wounded as both teams went into the break level without having scored any points.
When play resumed the Titans looked out-of-sorts and the Engineers began imposing themselves physically.

Their tight five laid a solid foundation with Jethro Garrett putting in a man-of-the-match performance. The highlight was a superb solo try, which included a side step that any outside centre would be proud of. Engineers raced to a 10-0 lead and the Titans had no answer.

Another try, set up by a brilliant cross field kick by Jacob Tripp put the game beyond doubt. The Titans tried to claw their way back with an apparent disregard for their own bodies but the Engineers defence held firm.

The Titans character has been their strongest weapon throughout the season, but the team that won did so through hard work and a structured game plan.

“We absolutely killed ourselves for this,” added Tripp, clutching the trophy. “We worked so hard and we definitely deserve this.”

The Engineers and Titans have cemented their position as the two most dominant teams on campus. On the evidence of the season, any challenges will have to be at their best to stand a chance of knocking these two monoliths off their perch.