Drama for Life heats things up

A steamy and explicit street performance about sexual awareness had Witsies squirming, with some shocked and somewhat offended, while others just wanted more. 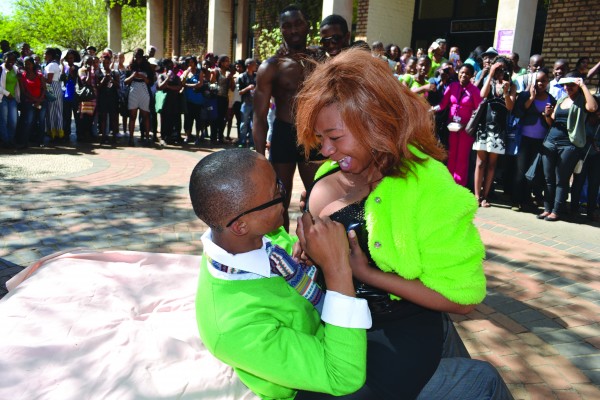 The performance on Tuesday was enacted outside the Umthombo building by three cast members of the play Love Happened Here, which is part of the Drama for Life Festival, Sex Actually.
Scanty outfits and the cast’s sexually charged demeanour had staff and students staring on in disbelief as they made their way to the bed at the scene.
Strutting her stuff, the prostitute and self-proclaimed “sex magician” Latoya, played by 2nd year drama student Tshepiso Shikwambane, walked down the steps. Behind her was her very masculine, yet obviously tamed sex toy, Bhoboza, played by master’s student Nji Alain, on a leash, watching every swish and sway of her luscious behind.
Accompanying them was the nymphomaniac homosexual Divine, portrayed by Zewande “BK” Bhengu, who plied his wares to anyone and everyone who would be interested.
Barely five minutes after they arrived, a large crowd had gathered and looked on as Latoya and Bhoboza displayed sexual behaviour of varying degrees of intimacy, from French kissing to touching and an array of sexual positions.
When Divine was not chatting up audience members, he would make a play for Bhoboza.
The audience was intrigued; ooh-ing, aah-ing and giggling at the cast’s increasingly explicit displays.
According to Drama For Life director Warren Nebe, the aim is to capture students’ attention to begin dialogue around race, gender, sex and HIV.
The cast agreed with this view, with Alain saying, “[The play] is not to promote pornography, perversity or nudity. It is to provoke questions around sex and eventually around how STIs [sexually transmitted infections] and HIV are transmitted.”
A number of students expressed shock, and sometimes disgust, at the explicitness of the display.
One female student was all for it, however. “Sexuality should be explored. That’s the right thing to do. People should know that they need to express themselves like that openly,” she said.
Similar displays took place over the past two weeks.
One was of a couple portraying intimacy under a sheet on a bed placed outside on campus.
“That was pornography, man,” said Nozithele Vundla, a 2nd year BA student. “I saw it but did not understand the whole message.”
Shikwambane maintains the display promoted safe sex.
“You’re having sex, we know you’re having sex. Let’s do it the right way,” she said.
The festival ends this evening.