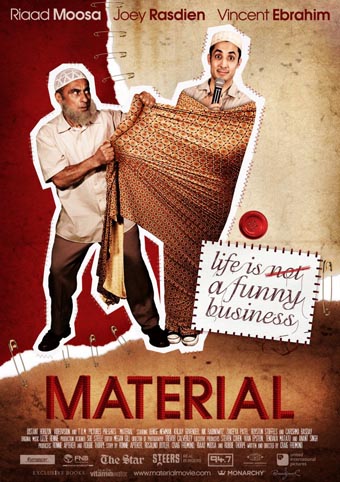 Its mix of comedy and drama – now labelled a “dramedy” – is based on the reality of a young Muslim man’s (Riaad Moosa) conflict between his secret love for stand-up comedy and his father’s (Vincent Ebrahim) expectations of him taking over the family business.

Added to that is his father’s conflict with his brother and other community members.

“Anyone who finds family important can identify with the sense of duty to family and the sense of yearning to express yourself artistically in a way that might be different to what is expected by your family,” says comedian Moosa, who takes up his first acting role.

He admits it was challenging making the change from stand-up to acting, “The dramatic aspects, especially, were quite challenging, having had no experience in that regard.”

“But because I was part of the writing experience, and it’s based on personal experiences, I could identify with it a bit more.”

had its opening weekend on Friday 17 and its production team are hoping to make 100 000 ticket sales so the movie can be taken to Britain and other countries.

So far the movie – which was given 40 screens for its opening weekend – has received the highest percentage attendance per cinema for a South African film, so they are optimistic as the sales “are looking good”.

“Hollywood, and the machine behind it, is quite powerful, almost overpowering,” says Moosa, asking people to go out, watch the movie and enjoy it.

“Right now it’s only the Leon Schuster movies that have good feedback and here we have a story that everyone can relate to.”

He says even though the story is shown through the life of a Muslim family and community that element is forgotten because it speaks of issues that everyone battles with.

“There’s this human theme in the movie that family is important and the challenges we face in life are extremely difficult.”

Despite tackling difficult subjects, the movie is meant to be a feel-good experience, displaying the different textures, colours and beauty of Fordsburg, Johannesburg, where it is set.