Graffiti artists painting the tunnel between east and west campus were interrupted by an off-duty campus security guard earlier this week.

The Palestinian Solidarity Committee (PSC) had organised the artists, known as Phloyd and Clark, to paint the tunnel for Israeli Apartheid Week. The security guard, Tatishe Moeng, demanded the PSC members who were present accompany him to Senate House as they did not have written permission.

PSC member Aslam Bulbulia said they did not think they needed permission.

Ziyaad Khan, a student development practitioner at the Student Development and Leadership Unit (SDLU), said students from clubs and societies do require permission to make use of the wall. Khan said the PSC should have followed the correct procedure.

While the PSC members chased paperwork with the Property and Infrastructure Management Division (PIMD), the graffiti artists continued to paint the wall undisturbed by security and without permission. By the afternoon, the “Boycott Apartheid Israel” artwork was up on the tunnel wall.

In case security came back Bulbulia carried an A4 piece of paper stating the PSC could paint in the tunnel issued by PIMD.

Students walked past and admired the mural. The artwork lasted less than 24 hours before it was vandalised. The vandals had blackened out the words “Free Palestine” and “Israel”. 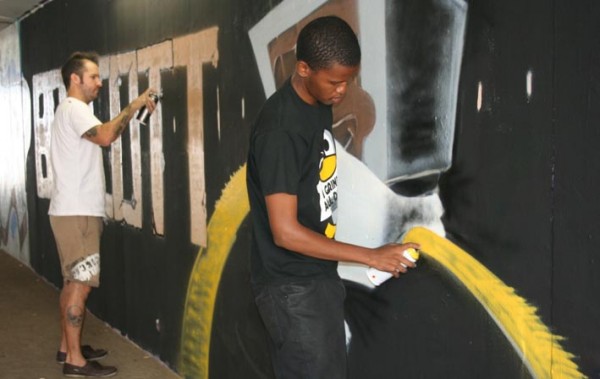