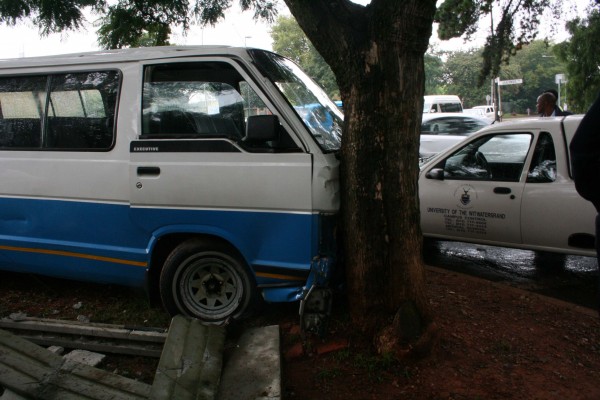 A car accident happened right at the door step of Ernest Oppenheimer Hall (EOH) in Parktown on Thursday morning .One passenger was injured and about 1.5 metres of the cement wall was demolished by runaway taxi.

Eyewitnesses said the taxi collided with a silver Corsa Lite. The taxi driver lost control, drove into the cement wall and came to a stop when he hit a tree. The accident occurred at the corner of Victoria and Blackwood Avenues.

The injured passenger sat teary-eyed in the taxi, waiting for an ambulance. The other passengers boarded another taxi and continued to their destinations. The male driver of the Corsa was not injured. He surveyed the damage to his car. A tow truck was at the scene almost immediately.

Mr Nazime Randera, accommodation officer at EOH and head of the Parktown cluster residence said: “No students were injured and the wall will be repaired in due course, while the University would recover their money through Legal Office”.

Campus Control said the accident occurred at around 8.45am. The two drivers made a statement at the Hillbrow police station. The cause of the accident is still unclear.