When American exchange students Chelsea Harrison, Renee Wilson and Nora Garrett arrived in Johannesburg in February, they never imagined they would end up begging on the city’s streets.

The actresses, who are in South Africa as part of Wits University’s drama exchange programme with New York University, had to ask for money near Rosebank Mall. This was part of their preparation for the role of Red in the recent Wits production Red Shoes, directed by lecturer Leila Henriques.

Harrison says Henriques gave them the unusual task to help them to develop empathy for Red. Red starts out as a young beggar but ends up being taken in by wealthy woman. Red is obsessed with a pair of red heels which eventually lead to her downfall. 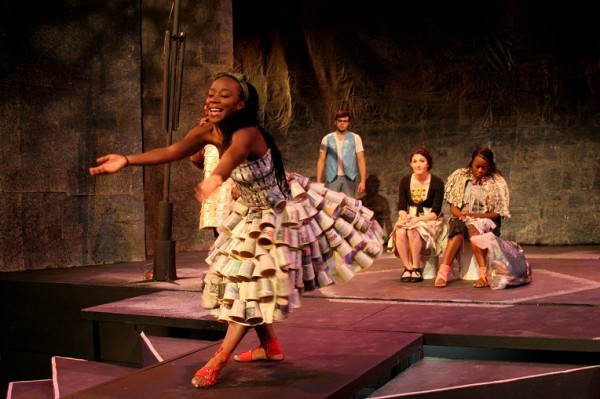 Renee Wilson as Red, a young beggar. Her costume, designed by Witsie Niicola Hetz, is made of newspaper and paper cups to symbolise poverty. Photo: Sally Gaule

Wilson says it was an important lesson in method acting. “It’s the idea of having experienced something so that you can re-experience it on stage.”

The role of Red was shared by four actresses, each of whom portrays a different stage in Red’s development. Harrison, who plays Red 3, says she found begging at the entrance to the Gautrain station scary, because “anything could have happened.”

She started feeling uneasy about the exercise when a man gave her R50. “You realise that you are a con artist,” she says.

Wilson was saddened by the reactions of passers-by.

“A lot of people pretended that they didn’t see me … [they] would stare at me, and then when they got close enough to make eye contact they’d pretend they weren’t staring”.

Other people looked at her as if it was her fault that she was on the streets.

“I’ve definitely been guilty of that myself before,” Wilson says.

“We tend to treat people who need assistance as if they are not human. I became like that … a creature for people to watch”. 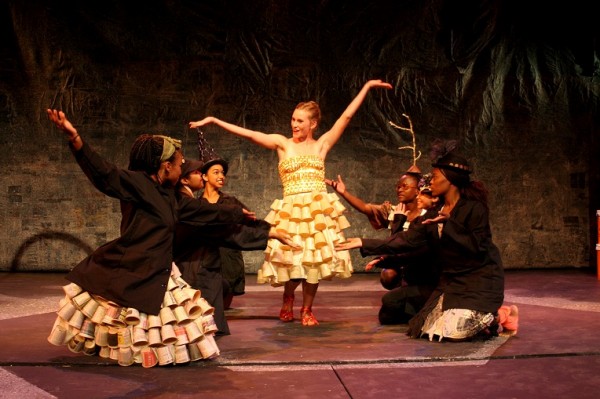 Nora Garrett, one of the four actresses who shared the role of Red. She portrayed Red's transformation after she was taken in by a wealthy woman. Photo: Sally Gaule

Nora Garrett who is white, also became a spectacle. Some of the white people who were shopping looked at her in disgust. The black people working in the shops also called their colleagues to come and see Garrett.