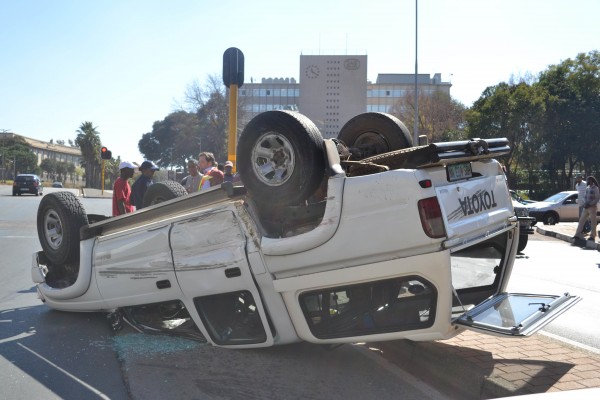 Wrong way up: The bakkie involved in the crash near the Jan Smuts entrance, behind the school of arts.

Two cars were involved in an accident on the corner of Bertha and Ameshoff on Thursday morning.

The accident occurred near the Jan Smuts entrance, behind the School of Arts, which most Witsies use on their way to and from Braamfontein.

The collision which involved a white Hilux bakkie and station wagon, resulted in the bakkie flipping onto the opposite side of the road and landing on its roof. The bakkie was said to be travelling from Randburg to the CBD.

Both cars were each transporting two passengers and all managed to escape without injuries.

The wrecked cars were towed away from the scene after Johannesburg Metro Police Department (JMPD) officials assessed the damages and took statements from the people involved.

Emergency services reached the scene in ten minutes. However, the female passenger who was in the Hilux was shivering and complained of coldness and chest pains refused to be taken to hospital.

Johannesburg Emergency Management Services personnel, Lizelle Delport, said the woman in the Hilux was shivering and recovered quickly after being given some water.

Delport explained that the woman who had refused medical attention signed a patient-refusal form and only showed signs of shock.

An eye-witness said, “The bakkie caused the accident after it skipped a red traffic light and hit the Toyota venture in the intersection.”

The driver of the station wagon Zivanai Msoni gave an account of what happened and said, the Hilux was right behind a taxi which also skipped the traffic light which had already turned red, when it hit his car on the right fender.

However the driver of the Hilux claimed at the time he was in the intersection while the traffic light was amber.

Fire fighters, paramedics and security guards helped lift the Hilux that had landed on its roof before it was towed away.