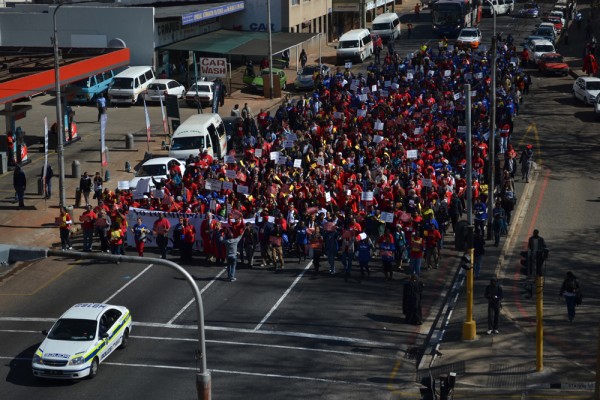 Wits academics and support staff marched around Braamfontein yesterday to protest against university management not granting their demands for wage and non-wage related matters.

The unions are demanding a 9% salary increase for support staff, a resolution of the dispute on shift allowances, an agreement on sliding scales to advance equity, the establishment of a childcare facility for Wits employees, an end to overselling of parking permits in non-designated parking areas and an increase in individual research incentives.

Members of Academic Staff Association of Wits University (ASAWU), the Administration, Library and Technical Staff Association (ALTSA) and the National Education, Health and Allied Workers’ Union (NEHAWU) gathered at the Yale road entrance at 12:30 pm, close to Jorrisen Street. David Dickinson, president of ASAWU, addressed the crowd and told them that it was to be a peaceful march.

The staff members were wearing academic gowns red and blue t-shirts to represent their unions. “The protesters held placards and badges that stated “Do not push us over the edge”. The crowd held up yellow pieces of papers as a gesture of warning to management. Some protesters told Vuvuzela they were giving management a yellow card and should they not listen to their demands they will follow up with a red card.

Some SRC members were also part of the march. Tebogo Thothela, SRC president said, “The SRC is here in solidarity with the protesters, we are behind the principles of free dispute and decent wages that are on the correct level.” Thothela went on to say that the salary increase should not equal to a university fee increase.

Both sides of the story

A worker at the march who did not want to be named said, “They have deposited 6.5% into our accounts but we want 9%. The university says it is world class but can’t give us decent salaries”.

A statement handed out by management at the march stated the university respects the rights of the staff to protest as long as it did not disrupt the services of the institution. It concluded that the university will negotiate salaries as long as they are affordable, sustainable and aligned to performance management.

There will be a one-day protest strike on 2 August in which staff will withdraw their services if these issues are not resolved.