Workers rooms a work in progress

New change rooms promised to Wits garden and landscape workers by mid-July are not ready yet. 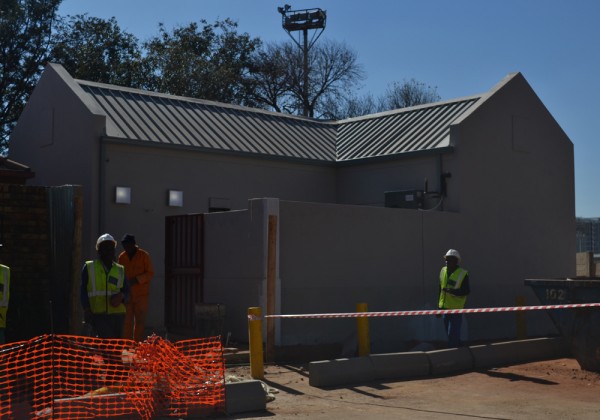 NEARLY DONE: The new and refurbished facilities adjecent behind the planetarium are expected to be done by month end. The structure includes seperate male and female ablution and showering sections and bigger eating areas.
PHOTO: Lebogang Mdlankomo

Although the structure is up, the completion deadline given to Vuvuzela last semester has not been met. Earlier this year, Vuvuzela documented the cramped and unhygienic condition of the change rooms located behind Jubilee kitchen and Hofmeyr House.

The East Campus shacks, intended only for temporary usage, have been used by workers for years now.

However, the Project and Infrastructure Management Division’s Siphiwe Dlamini said completion of the project is set for the end of July and, “should there be any delays, it could be just a week long. Let’s say the rooms will be ready for use between August 10 and 15.”

The refurbished rooms were initially meant to cater for 22 workers, but the procurement office increased that number to 40.

The workers expressed disappointment with the progress so far. They also claimed they had not received any information about the project since the Wits landscaping contractor changed and their employment contracts were moved from Sonke to Servest.

Besides waiting for the facilities, the workers are awaiting confirmation on whether Servest has been awarded the tender for the new financial year and what their salaries will be. They held a protest on June 12 when Servest would not inform workers of salary increases before their contracts were renewed.

A worker who wished to remain anonymous said, “We don’t know whether the rooms are going to be for us only, because some other [general] workers say they are going to be located there as well. No one tells us anything.”