JOHANNESBURG came alive with child-like excitement on Tuesday following the unexpected snowfall that many had never seen before in their lives. The homeless, however, were left exposed to the elements yet again.

Wits Vuvuzela visited some teenagers who have made a home for themselves at the corner of Juta and Simmonds Street, Braamfontein, to find out how they were coping with the change of weather.

“I am very happy, if I do not get excited today, who knows when I will ever see snow again in my life?” said Thapelo Mabena from the loft where he lay huddled next to pint-sized Thabo Moloi who nodded in agreement.

Another unkempt head peeked from a tattered and filthy brown blanket from the loft next to Mabena and Moloi’s. 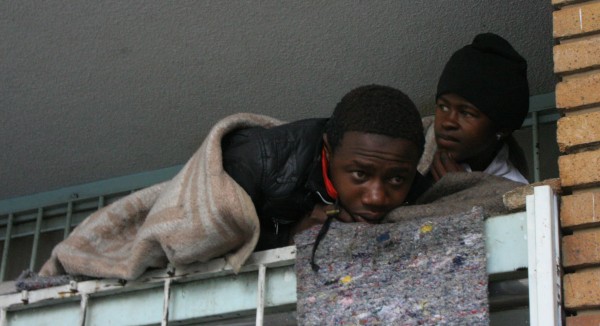 Nkululeko (left) came to Joburg from the Eastern Cape following the death of his parents. He says he has failed to get an identity document and has no hope of getting it as he is of no fixed abode. Photo: Zandi Shabalala

An 18-year-old boy who identified himself only as Nkululeko said that while the snow was exciting, he and his friends would have to go hungry as they could not go about their daily “business” of parking cars and asking for money as the streets were too cold.

“Those who want to give us money will have to stretch their hands from down there and give us while we are here; we are not coming down today,” said Mabena.

“On a bad day we make R10, but on a good day, tjo, we make even R100,” Mabena added with a huge grin on his face as he reached for his plastic bag of glue.

Other homeless people, though, were not as upbeat about the snow.

Many homeless people die in winter as a result of hypothermia.

Many are logged as an “unconscious collapse” because the people calling in can’t actually articulate what has happened – they may describe it based on the symptoms and complain that the patient is having breathing difficulty or abdominal pain.

The Braamfontein boys are grateful that nobody has tried to chase them away from their ‘home’ and the police do not hassle them. “We are good friends with them,” said Mabena.