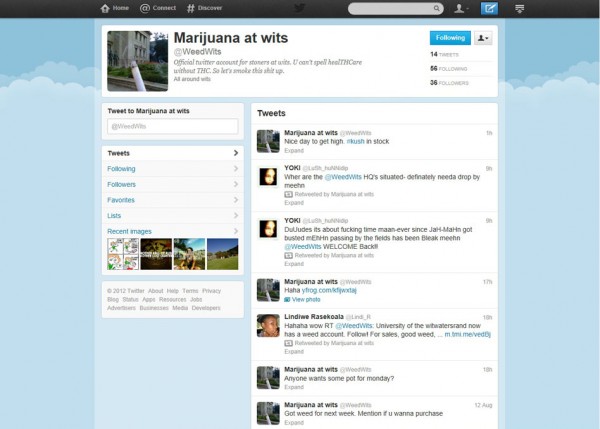 The account, @WeedWits, describes itself the following way: “Official twitter account for stoners at wits. U can’t spell healTHCare without THC. So let’s smoke this shit up.”

The group already had 57 followers at the time of going to print.

Wits Vuvuzela asked for comment and they replied, “you can’t stop people from consuming weed. I

t’s not a drug, it’s a way of life. Peace, enlightenment and wellness.”

Pictures added to the account include a photo with the text: “If the whole world smoked a joint at the same time, there would be world peace for at least two hours.”

Dean of Students, Prem Coopoo commented, “The University strongly condemns the misuses of its name by the group.

“The matter has been brought to our attention and an investigation is currently underway.

“Campus Control is aware that marijuana is being sold on campus and are actively working to uproot this practice on campus.”

A Wits Vuvuzela investigation earlier this year, “The Highs of Higher Education”, showed the weed culture at Wits is conducted with little fear of reprimand or punishment.

Dealers who are not students easily find their way onto campus every day and it is relatively easy to find the dealing spot.

One man interviewed even proudly claimed he led the movement of weed-smokers from the basketballs courts on East Campus to the cricket Oval. Joints cost around R10.