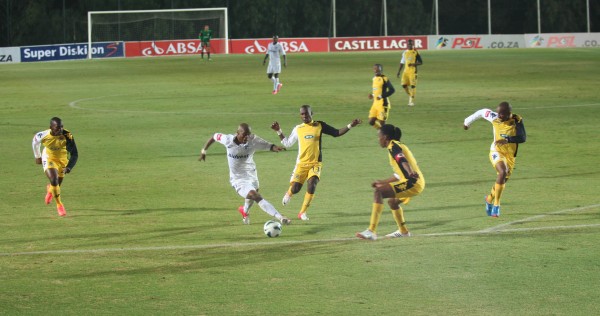 Bidvest Wits and Black Leopards played to an entertaining 2-2 draw in an Absa Premiership match at Bidvest Stadium on Wednesday night.

Calvin Kadi and Ryan Chapman scored for Wits, while an own goal by Mbulelo Mabizela and a strike from Rodney Ramagalela gave Leopards an equalizer in the second half.

The first chance of the game fell to the hosts when Chapman’s powerful drive missed the top left corner of the goal.

Black Leopards took the lead in the 16th minute with Mbulelo Mabizela own goal.

Six minutes from half time the “Clever Boys” equalized when defender Mabizela supplied a cross to Kadi who sent the ball into the back of the net.

On the stroke of halftime Bryce Moon delivered an inch perfect cross into the box which was met by Ryan Chapman, who powered home a header.

Black Leopards came out firing on all cylinders after the break, scoring the equalizer through striker Rodney Ramagalela.

Wits launched one attack after another but it was the visitors who scored the equalizer in the 58th minute. Moses Kwena did well to get past the Wits defence, sending the ball through to Ramagalela who sent it home, salvaging an important point away from home.

Both teams created many scoring opportunities in the dying minutes of the second half but this did not pay off. The match finished 2-2, earning Wits its first point of the new season

One thousand free complimentary tickets were given out to students at the gate in a bid by BidVest Wits to get more students to attend their home games.