Authorities at Wits are investigating the circumstances that allowed water to pour through the ceilings in some rooms at Wits Junction last weekend.

One of the tenants at the Shosholoza building said his ceiling collapsed on Sunday after turbulent weather conditions affected parts of Johannesburg on Saturday night.

Two other students from the Kum Saan building had a similar problem, where water was reported to be coming through their lights in the ceiling.

Tshidiso Mogale said he had been experiencing problems with a leaking ceiling earlier in the year. The second-year law student said he reported this to Wits Junction maintenance. 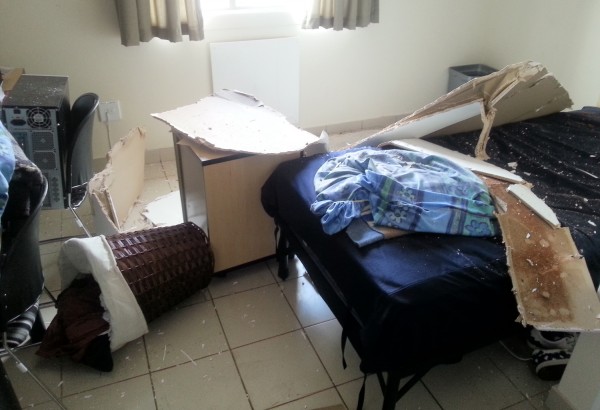 WHEN IT FALLS APART: The collapsed roof in the room of a Witsie at the student residence Wits Junction. The ceiling fell down last Sunday, while the student was in the room, due to the turbulent wetaher conditions and started to leak water. Photo: Lebogang Mdlankomo

“The problem started in May and Martha, the housekeeper, came and assessed the situation and they patched it,” Mogale said, indicating an area in the ceiling that had been plastered by maintenance.

Mogale said that last week Thursday however another leak happened in a different part of the ceiling. After it was inspected by maintenance he was promised it would be taken care of the following day but it wasn’t.

When it started raining on Saturday night Mogale said he waited to see if there was going to be a leak. At first there was nothing.

Then, “After 10 minutes, I started hearing a sound as if a tap was left open,” he said.

To prevent damage to his belongings he used a dustbin and towels to catch the leaking water.Mogale then moved to a room in another block for the night.

When he went back to his room the following morning Mogale said he heard a creaking sound from the ceiling while taking shoes from under his bed.

“I moved away from the bed and in a split second the ceiling just caved in.”

Clifford Chauke, the warden on duty that night, said he had called the manager and told him the matter needed to be attended to.

“While I was busy assisting Tshidiso, two students came from Kum Saan [another Junction building] with the same problem,” Chauke said.

He said their situation was “far worse” than Mogale’s because water “was coming from all over, even through the lights”.

Junction’s manager, Nazime Randera said the matter had been dealt with and Wits’ capital development project office was carrying out an investigation.

“They are calling for reports from Tri-Star,” which was the main contractor of the project, said Randera.

He said the weekend’s incident could have been caused by the build up of hail which prevented the flow of water to the gutters which resulted in the water moving through the slabs.

He added that “the problems occurred in some of the isolated rooms on the top floors”, however the investigation will look at defects to see if there were any “corners cut”.

The Wits Junction project was part of a plan to address the shortfall in student accommodation and increase capacity by housing 30 000 students in all residences in 2012.