Hazel Meda tells the story of Mama Yvonne who has been running a soup kitchen in the city of Johannesburg for the last 32 years. 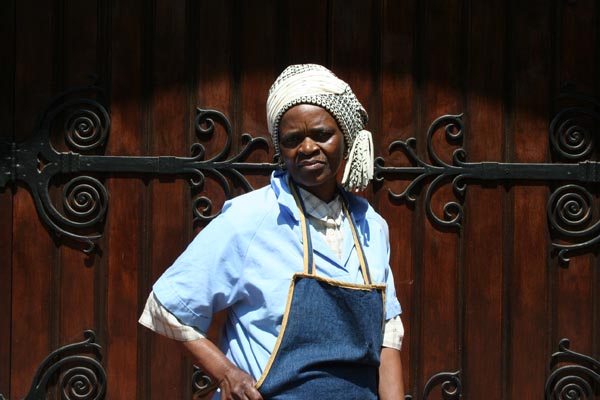 Yvonne Moloelanga has a shrill voice and powerful lungs. Dressed in a brown beret, blue housecoat and white sneakers, the tiny old woman shouts across the courtyard, telling one of the volunteers he has brought out the wrong box of bread and must go and get the right one.

She runs a tight ship at the 11 o’clock soup kitchen at Holy Trinity Catholic Church, but she also has a soft spot for the homeless people.

At the end of the meal, she distributes small, transparent sandwich bags containing an orange, a few biscuits and a packet of chips.

“Enjoy your weekend,” she says, as she hands the package to an elderly man.

Mama Yonne, 62, has been running the soup kitchen for the last 32 years but she will retire in three months’ time. The stomach ailment which necessitated an operation and six months of sick leave last year will force her to leave the homeless people who have, quite literally, become her family.

She used to work in a factory, making melamine cups, saucers and salt and pepper shakers. But she found her calling in 1980, when her best friend told her that the Jesuit priests at Holy Trinity were looking for a housekeeper.

Her predecessor, an elderly lady, used to make sandwiches and pass them though the window to the homeless people who came knocking.

But Mama Yvonne thought a sandwich wasn’t enough to get the homeless people through the day and suggested giving them a proper meal. She told her bosses she was young and energetic enough to prepare the food, which she did in addition to her housekeeping duties. 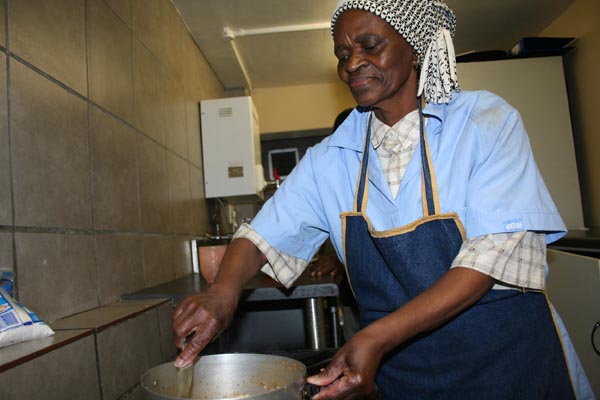 She describes her work with the homeless in between preparing vegetables, hamburgers, gravy and rice for the priests’ dinner and answering the phone, which screeches to life every few minutes.

She says she enjoys looking after the homeless and they look after her too. She feels safe walking around any part of the city centre after dark.

“I will just hear them calling ‘Mama Theresa, Mama Theresa!’ from all corners. It’s what they call me, because Mama Theresa used to feel for people.”

“I feel for them. I really feel for them”, she continues. “Especially in this cold weather and in the rainy weather. When you sleep in your warm house you think of them: Oh, the poor children, the poor people, what are they doing now in this weather?”

Even those who are currently being helped at the soup kitchen spare a few rand to buy her treats to show their gratitude.

Her compassion led her to take two homeless boys, Thabo and Dumisani, to stay with her and her family in Soweto sometimes.

“And my children welcomed them. They never said ‘Who’s this? Who’s this?’”

She says Thabo and Dumisani are big men now. Thabo is struggling, doing piece jobs, but Dumisani is doing well, having been sponsored by a parishioner to go to art school to develop his talent.

“Even today they come and visit me. They are part of my family,” Mama Yvonne says proudly.

“They never forget me,” she says, her voice getting higher and louder as she gets more and more excited.

“They always say ‘Mama, if it was not for you, I wouldn’t be this today. Here’s a drink for you. Here’s something for you.’”

Even those who are currently being helped at the soup kitchen spare a few rand to buy her treats to show their gratitude.

Mama Yvonne pulls a small chocolate bar out of her apron pocket. It’s a present from Eric, a homeless man who now helps her to prepare the daily meal.

She crams the confection into her mouth and chomps on the ball which forms in her cheek.

She got her love of clothes from her mother

Mama Yvonne has always had a taste for the good things. She liked beautiful clothes and has many photos to prove it.

There’s a photo from 1970, when she was pregnant with Clementine, the first of her three children. She wears a fluffy white beret and a housecoat-style blue dress. In fact, the outfit looks strikingly similar to what she wears today, except for the big white-and-red embroidered flowers on the hip pockets, the chunky brown suede heels and the lipstick.

She says she got her love of clothes from her mother, who worked in a menswear factory, and who used to make Yvonne and her three sisters matching Christmas clothes which made them the envy of the neighbourhood.

“We were the best, with our stiff-neck dresses, like wedding dresses. They buy lace and they sew it and they will buy starch and it will look like a peacock.”

But life wasn’t easy for Yvonne and her three sisters and two brothers.

“My mother struggled with us.”

Yvonne’s father walked out on the family when she was 14 or 15. To make matters worse, he used their address to open an account at a furniture shop.

“He take things with our address. He never brought them home. He take them wherever he went after he depart with my mother,” she says shaking her head.

When her father failed to pay for the radio and other items he had taken on credit, workers from the shop came with a truck and took Yvonne’s mother’s furniture.

View Larger Map – the location of the Holy Trinity Church in Braamfontein, Johannesburg

The family survived thanks to help from Yvonne’s relatives and to her mother’s sweat and “smarts”.

“I have learned a lot from my mother, because my mother used her hands, her brains, to do something. She never just sit and wait for income to just come from her boss,” Mama Yvonne says admiringly.

Her mother sewed clothes for neighbours and also sold food.

“Every weekend, she used to wake up early in the morning. We used to bake koeksisters and samoosas. Saturdays and Sundays we used to go out at six o’clock in the streets to sell all those things.”

“That’s why today I can also use my hands and my brains,” She says.

Mama Yvonne has run a catering and decorating business on weekends to supplement her income since her husband died in 1990.

“When you are a mother … you have to work hard”

She has catered birthday parties, including her granddaughter’s second birthday party, weddings for people in Soweto and Holy Trinity parishioners, and church functions.

She has beautiful photos of some of her work.

She says she learned to cook from her mother, who was a very good cook, and decorating comes naturally.

“You know, this is so simple. People are going to school to do this, but if you can just use your common sense you see that something nice can come out of it.”

Mama Yvonne says she will continue with the catering and decorating to get income when she retires from the church.

Her children, Clementine and Patrick, are unemployed and she supports them and her three grandchildren and one great-grandchild, who all live with her in the small house she worked hard to extend. 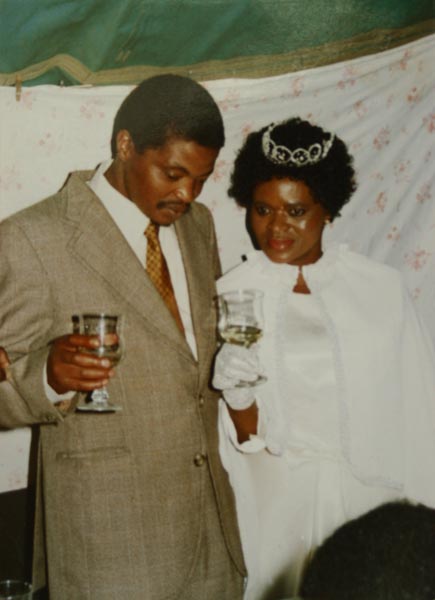 Mama Yvonne and her husband Henry – also known as Prince because of his good looks and regal bearing – on their wedding day. Photo: Yvonne Moloelanga

Her children help with the business, but it was their late brother Eugene who was a very good baker and cook. Mama Yvonne has a photo of him cooking on a small grill in their garden.

She shows me about 30 more photos of him.

He was light-skinned, handsome and a snappy dresser, like his father Henry, whom Yvonne says was nicknamed Prince because of his good looks and regal bearing.

A few of the more recent photos are bordered with flowers, thanks to the magic of the digital age.

Most of the photos are from Eugene’s 21st birthday party. There’s one in which Mama Yvonne is giving him a big silver key while balancing a big blue-and-white iced cake.

There’s another one with her planting a kiss on his lips.

Some are from his confirmation. She proudly tells me that he was shaking the hand of Bishop Mvemve of Klerksdorp.

There’s also a tiny photo of a chubby child in red clothes and a white bonnet.

At first, Mama Yvonne thinks it’s one of her grandchildren, but I tell her that the picture looks quite old and that it has the words “seventy three” scrawled on the back in black ink.

He died of a headache

Mama Yvonne says he died of a headache.

She says he went to Baragwanath Hospital on Saturday and the nurses gave him Panado for the pain.

When the severe pain didn’t go away, he went back on Sunday and was given more Panado.

On Monday night he called an ambulance and was taken to the hospital, where he waited for hours before being seen by a doctor.

On Tuesday, he was dead.

The doctors said it was meningitis.

Mama Yvonne says she wasn’t angry at the hospital staff.

She is comforted by gospel music. Her favourite song is Rebecca Malope’s Umoya Wam’.

She took off the uniform, revealing trendy trousers and started dee-jaying

Mama Yvonne hasn’t let her son’s death rob her of her joy.

She is still fun-loving and mischievous.

About a month after her son’s death she took part in a DSTV programme which was filmed at a church in Soweto.

Wearing a St Anne’s guild uniform which she had borrowed from her sister – she is a devout Catholic but doesn’t have time for all the guild activities – she stood in front of the congregation. She took off the uniform, revealing trendy trousers and started dee-jaying.

“I was dee-jaying. I’m serious. Yes!” she shrills at my amazement. “With all the records and things. And jiving.”

She says they called her DJ Gogo.

She has always loved performing.  As a child, she loved reciting poetry and would volunteer to give speeches at assembly when inspectors visited her school.

A fellow detainee begged her not to kill herself

Her performance skills once saved her from spending a night in jail. She had forgotten her dompas or “pass book” at home and was arrested, along with many others, while waiting for the bus one day in 1977.

The police took the group to Booysens Police Station and said they would have to spend the night in the cells unless they told their families to bring R50. She had no way to contact her family and came up with a plan.

Two days earlier, she had gone to the doctor to get medication for the flu and she had the medicine in her handbag.

“I said ‘Oh, I am going to kill myself. I will drink all these tablets. I can’t sleep here.’ ”

Taken in by her act, a fellow detainee begged her not to kill herself, saying his family would pay for her as well.

“That’s how I was safe to go home,” she says, chuckling.

“And since that day, I never left my ID behind. It always stays with me in my handbag, even up to now.”