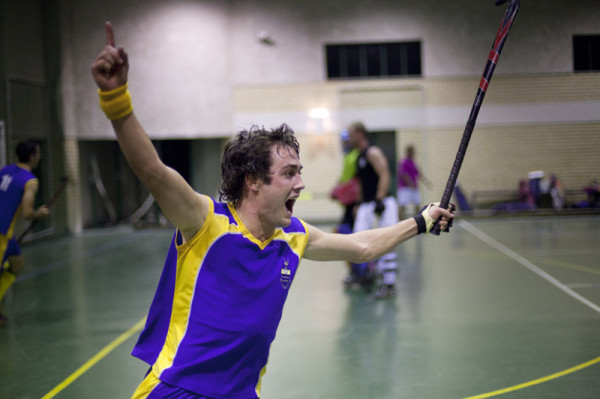 Wits striker Matthew Poval celebrates after scoring a brace against Jeppe A on Tuesday. Wits won 6-5 in a thrilling match.

A late goal in the final two minutes of play sealed a thrilling 6-5 victory for the Wits Men Hockey over Jeppe A on Tuesday evening.

“It wasn’t our prettiest game, I mean we’ll take the win, Jeppe A is always a good game. They are tough opponents and I guess Wits played well and we put the ball in the back of the net,” said Wits Captain Geoffrey Scott.

Tuesday’s victory was their third straight win of the indoor Premier League season.

Wits began the game at a fierce tempo. They aggressively pressed the Jeppe’s defence and were rewarded almost immediately, in the 2nd minute of the game, by a well-constructed field goal by Stuart Philip.

Jeppe responded two minutes later with a goal of their own after they won a penalty corner and used a slip variation at the top of the D which narrowly beat Wits goalkeeper Carl Zontag’s first man rush.

Both sides continued to exchange shots and turnovers but scores kept level at 1-1. In the 13th minute Jeppe defender Dylan Shepard accidentally stopped a shot on the goal line with his chest. Wits’ Matthew Poval stepped up and converted the penalty stroke given against the Jeppe defender to break the deadlock and give Wits 2-1 lead.

Wits seemed happy to hold the slim advantage and began to play more defensively as half time drew closer. But Jeppe capitalised on some sloppy defence on Wits’ part and pulled two field goals in the space of three minutes to bring the score to 3-2 against Wits. The score remained 3-2 to Jeppe going into the half time break.

The second half began with the same tenacity of the first. The pressure was building for the students as Jeppe managed to take control of the midfield making life difficult for the Wits defenders to get the ball out the back from 16 yard hits.

Wits caught a lucky break in the 25th minute when a conceded short corner was overturned by the referee after Jeppe expressed dissent during the play’s build up. Jeppe were too busy arguing with the reversal of the decision to notice when Wits took a quick free hit. The lapse in concentration left Wits with a three-on-one against Jeppe’s defence. Wits won a penalty corner which Matthew Poval converted to draw the score level again.
In a matter of seconds after the restart Wits put another goal in the back of the net this time by Jared Poval. Amazingly, Wits put in a third unanswered goal by Devon Cambel giving themselves a two goal cushion of 5-3 with just eight minutes being played in the second half.

But Jeppe was not done. In the 32nd minute they pulled another goal back to bring the score to 5-4 after robbing a Wits defender during a 16 yard hit. The game heated up after a series of strong tackles were made by the Wits side. Some of these tackles were too strong and Wits conceded a pair of penalty corners. But Jeppe were unable to score, blocked out by Zontag’s last minute diving saves.

Jared Poval scored his second of the match from a neat counter attack in the 38th minute to give Wits a two goal cushion at 6-4 which left them enough space to wind the clock down. Jeppe did score from a late consolation penalty corner at the end of time to end the game at 6-5 to Wits.

“We dug deep, and we showed a lot of heart. At the end of the game they were coming at us very hard but we stuck it out and came out with a win,” said Scott after the game. 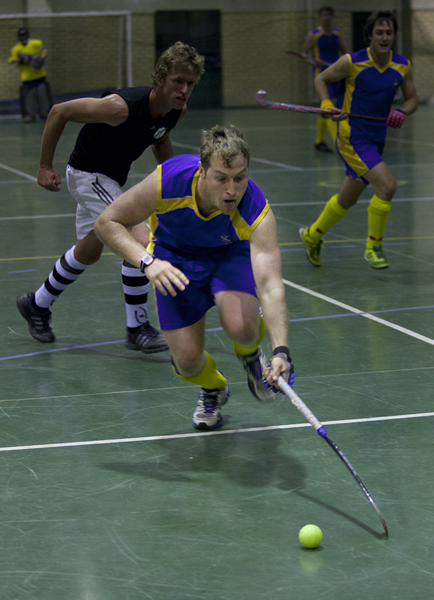 Devon Cambel, Wits, reaches for a ball during the Wits Men Hockey match aginst Jeppe A. Wits won 6-5 in a thrilling contest. 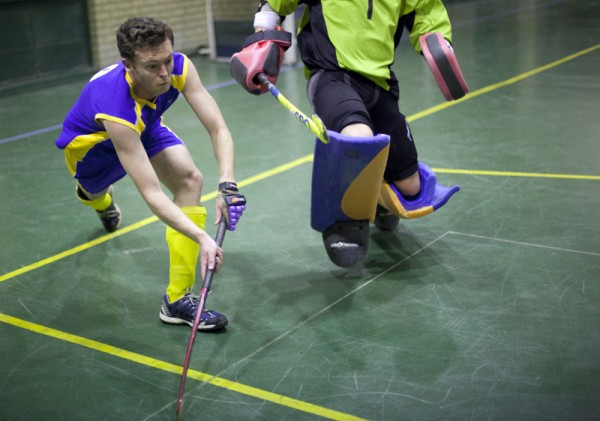 Andrew Hofmey (left) is closed down by the Jeppe A goalkeeper during their match on Moday evening. Wits won the match 6-5.