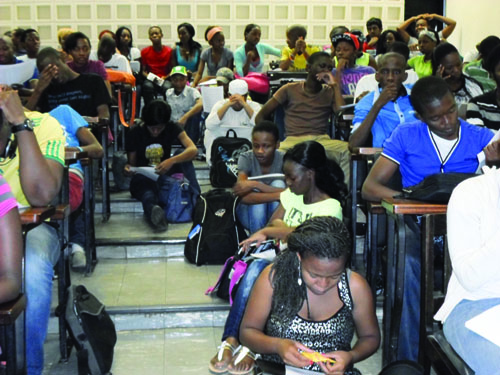 Some students seated on the floor of the umthombo building, due to lack of space. Photo: Nomatter Ndebele

A venue allocation problem across campus has resulted in overcrowded classrooms with some students left sitting on the floors during lectures.

Riaz Adam, Property and Infrastructure Management Division (PIMD) deputy director of venues and space management, said that there has been a venue allocation problem across various departments in the university.

Vuvuzela witnessed one lecture hall filled with first year chemical and metallurgical engineering forced to sit on the floor because there isn’t enough seating available in their lecture venues.

There are 404 registered students scrambling for seats in the Umthombo 1 venue which only seats 287.

The lectures also include a lot of interactive learning which requires the students to be seated properly, said senior lecturer Laurie Woollacoot.

He said he has been able to organise extra chairs, but they don’t always arrive due to miscommunication.

Woollacoot said the problem is not the large class but rather a lack of resources. “I can handle 400 students no problem, with the right resources,” he said.

The classes have been full to capacity for the past three weeks and Woollacoot said he has contacted but they have failed to respond to him.

This year has been a challenging one in terms of allocating venues due to the increased numbers of students that enrolled in the university this year, Adam said.

The process of venue allocations allows the various university departments to request a venue based on the class size that they will have. This starts in June, where departments are asked to submit their requests, and upon receiving all the requests will start to allocate venues, starting with the largest classes working their way down. All this information is then posted on the PIMD portal, allowing the various departments to see the venues they have been allocated.

However, what often happens is that the number of expected students increase or decrease, from the initial requested number, and then there has to be a shuffle of venues, said Adam.

Adam said that the problem is the tight time frame in which the allocations office has to work in. By the time they have numbers they can work with, there is about two weeks left to the start of term and in some cases registrations still continue after the term has started.

Adam said that he does not condone the use of extra chairs in lecture venues as they pose a serious health and safety issue “if there is an emergency, the students have to try and get out without having loose furniture to try and get around”.

The planning office is currently reshuffling venue allocations, and they hope to have the situation under control soon. The classes with the largest numbers will be dealt with first.