Wits Solar Car team gear up for take off

A GROUP of students are going to enter their very own solar car into the Sasol Solar Challenge in 2014.

Bradley Rautenbach, 4th year Mechanical Engineering, said the new Wits Solar Car will cost about R3 million to build if the team is to stand a chance of winning.
The core team members consist of three engineers and an accountant. They have 25 other people assisting them.
Chase Mitchel, 3rd year Mechanical Engineering, said that it was great that they have so many people on board at the moment but said he was certain that at least half of those people “will bail” along the way.

“We really need other people from different faculties whose different specialities will help the team,” said Kabelo Ngwenya, 3rd year Mechanical Engineering. Those specialists include Nick von Rovetz, 3rd year Accounting, who joined the team to help out with the financial side of things. 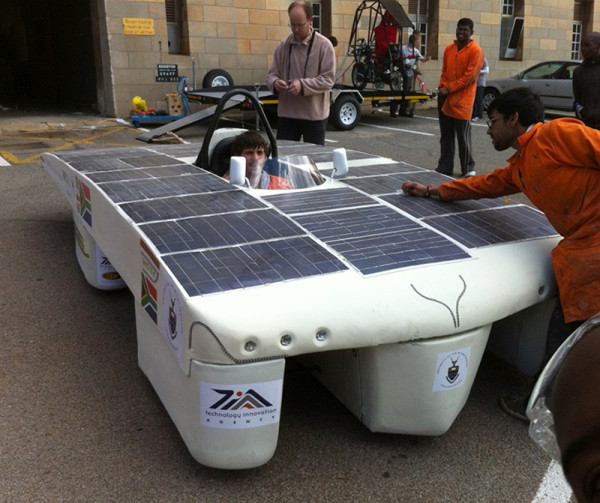 Last year, the team entered the same biannual competition and their solar car came in fourth place in their category.
The team was unanimous in their claim that funding was one of their biggest stumbling blocks. They simply did not have enough money to build a car that could compete with the winning car which had a $20 million budget.

“The new solar car will feature a semi-monocoque carbon fibre chassis bringing the total weight of the car to 150 kg where as the last car weighed 339 kg” said Bradley. Carbon fibre is most commonly used in Formula One racing cars.
“The materials needed this time around cost a lot more but will ultimately make for a better quality car,” said Ngwenya.
The design concept for the solar car drawn by Rautenbach can be seen on their posters all over campus.
The solar car will be named “Parhelion” which is the name of an atmospheric phenomenon, much like the one last year when there was a halo around the sun.