Braamfontein’s dull concrete facades have come alive with graffiti as part of the City of Gold Urban Arts Festival.

The festival started on Sunday and features showcases of street art by local and international artists. It’s managed by Braamfontein’s own Grayscale Concepts gallery on 33 De Korte Street.

The festival includes graffiti murals painted around the city in places like Braamfontein, Newtown, the Maboneng Precinct and Jeppestown and will also include walking tours and film screenings.

The festival is in its third year and is the brainchild of respected graffiti artist Rasty, who runs the Grayscale gallery and tattoo parlour.

The festival kicked off with an opening at the gallery where a large mural covering the entire wall of the adjacent parking lot was painted by artists Pose, Love and Curio. This was the first of many murals that will adorn the walls, alley ways and other locations around Johannesburg for the next year.

Organisers of the walking tour, Past Experiences, say that Johannesburg has the potential to become the “graffiti capital of Africa”. This is because the city has so many spaces that can be painted, and unlike overseas, art works tend to stay up for much longer and become an important part of the environment.

The aim of the festival and the art work is to enhance sites around the city that might have previously been “feared or forgotten by the city’s inhabitants”, according to the festivals website.

On a graffiti tour of the Maboneng Precinct, Troyeville and Jeppestown on Wednesday, a large group of tourists walked through parts of Johannesburg notorious for crime and violence with carefree curiosity. 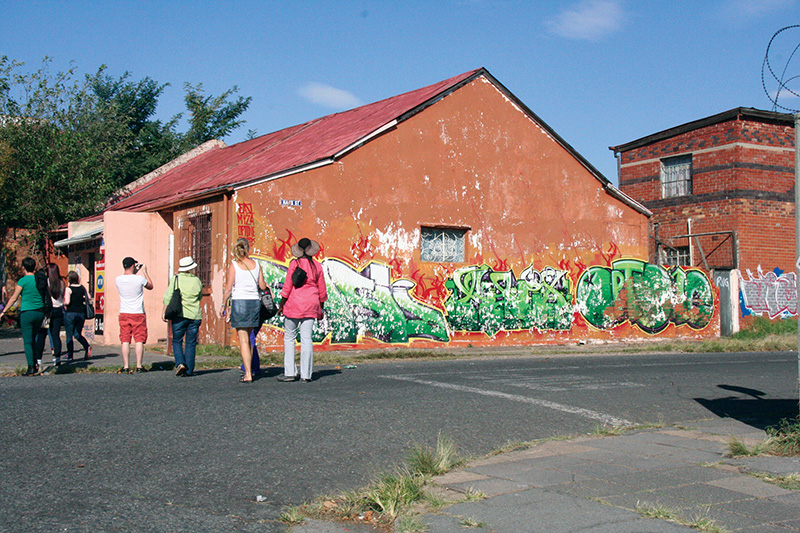 One of the tourists, a Singapore-born woman who moved to Johannesburg almost three years ago, said that this was her third time on the graffiti tour and she was amazed at the number of people who had joined the walk this year compared to last year.

“Before I came to Johannesburg I was so scared. I cried for three days because of all the things I had heard and read about South Africa,” said the woman.

The City of Gold Urban Arts Festival takes place until the 13th April and is open to the public.