Food scare opens a can of worms

THE WITS main dining hall has come under the spotlight following the discovery of a worm in a burger last week.A second year accounting student discovered the worm after she bit into her chicken burger.

The student, a house-committee member at one residence, was having lunch at the main dining hall on East Campus when she discovered the worm in her food.

The meal had gotten off to a bad start when soon after receiving her food she realised that the burger roll was too dry to eat.

Despite this, the student said that she was hungry and decided to eat the burger patty. That’s when she discovered the worm.

“I thought maybe it’s a dead piece of lettuce or something,” she said. “then it started wiggling and I was like, ‘No! Lettuce does not move!’.”

She reported the worm to a staff member of the catering company, RoyalMnandi, and was later joined by the dining hall’s operations administrator, Bontle Mogapi, who took picture evidence of the contaminated food.

“And then they offered me a lousy fruit-pack,” said the student. 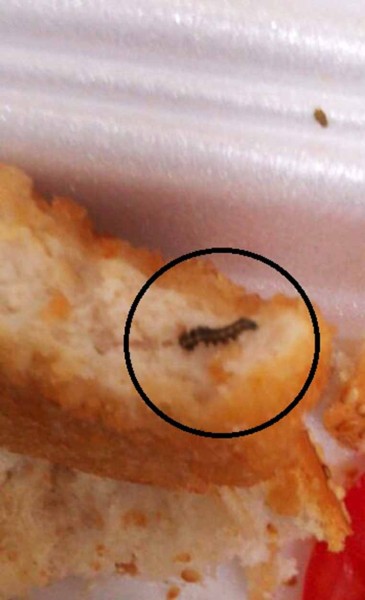 Joanne Rowan, deputy director of catering and retail, said in cases of food security alerts, such as a student finding a foreign object in their food, the matter would immediately be brought to the service provider’s attention. “We have never had a test come back positive for the presence of food illness causing micro-organisms in our food,” she said.

RoyalMnandi began servicing the Wits main dining hall in 2012. Students took to the dining hall’s Facebook page to express excitement at the change of caterer and the newly renovated eating space.

But students said standards have since dropped and they are unhappy with the current state of the service provider. One affected student, Dominic Khumalo, recently published a copy of his letter to the vice-chancellor, Prof Adam Habib, on Facebook. In this letter he said students were unhappy with the declining quality of food and services at the facility.

Khumalo claimed that students were impressed with RoyalMnandi during their first four weeks of service in 2012.

But he said the food was of poor quality and the portions were small. “The money we pay per meal is more than R30 and the service we receive is tantamount to R10.”