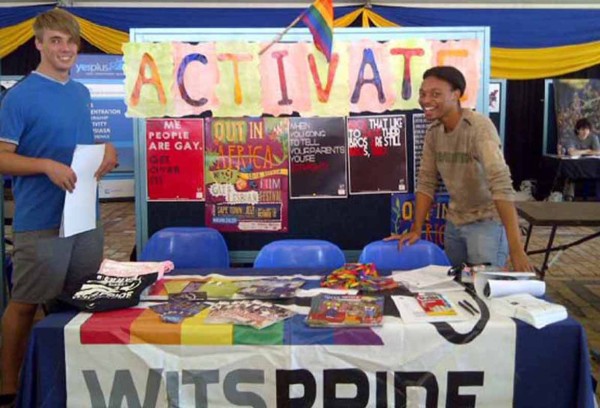 Gay Pride:members of ACTIVATE at this year’s society sign up

MEMBERS OF the Wits gay community are collaborating to petition for the reinstatement of The Johannesburg Gay Pride parade.

Last month, the board of the Johannesburg Gay Pride Festival Company announced it was ending its support of the event it has hosted for the past seven years.

There has been an outcry within the gay community regarding the cancellation of Pride. “It’s the only time in the year where gay people from all walks of life and all races come together,” said Dumi Msibi the chair of ACTIVATE, which represents the campus lesbian, gay, bisexual, transgender, intersex and asexual (LGBTIA) community.

“As a gay person it’s one event that’s always there on the calendar, it’s a fixture, it’s great. You get to meet people, you get to interact with your friends. Everyone comes to Pride, everyone you haven’t seen will be there, it’s one of those events everyone looks forward to, so it [the cancellation] is very unfortunate” said Msibi.

The Wits Kaleidoscope Society, which provides a network for LGBTIA students, has been attending Pride for the past two years.

“It’s sad to know we no longer have what many call ‘A Gay Christmas’,” said Thuli Mathabela, a representative of Kaleidoscope Youth network.

“Students will no longer have a bigger platform where they have felt safe to be themselves without judgement,” Mathabela said.

“So many individuals of our community deal with discrimination on a daily basis, be it family or socially. They face excruciating experiences and Pride was, honestly, to most of them the only happy event they looked forward to.”

According to Tish White of the Wits transformation office, the announcement by the board will not necessarily be the end of Johannesburg’s Pride event.

The board’s vote follows the disruption of last year’s event when activist group, 1 in 9 Campaign, protested the parade and demanded one minute of silence for lesbians killed in townships.

The board said it had lost Zoo Lake as a venue for the event and the event had changed, from a low risk to a high risk security threat. They had also lost support from the SA Police Service.

To view other stories surrounding homosexuality and controversy in South Africa click on the following links: