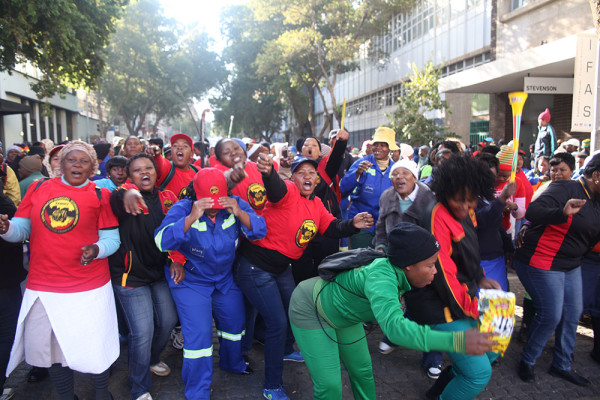 We don’t want breathalysers: Pikitub workers dance during their illegal “strike”. The workers do not like some of the changes proposed by management, including the use of breathalysers. Photo: Emelia Motsai.

Pikitup employees held an illegal “strike” outside their head office in Braamfontein this morning.

The workers, who are members of South African Municipal Workers Union (SAMWU) were picketing, singing and dancing causing “chaos” on the street while members of the Johannesburg Metro Police Department (JMPD) and Pikitup security tried to maintain order.

Head of Communication and Stakeholder Management as well as spokesperson of Pikitup Desiree Ntshingila told Wits Vuvuzela that the employees were “striking illegally” as they [Pikitup management] had obtained a Court interdict to stop the “strike” from moving forward.

“We received a notice last week where employees expressed their grievances,” Ntshingila said.

A press statement released by Tahir Sema of SAMWU said:

“Contrary to what the employer and the media are reporting, this is not a strike. The union is currently in discussion with workers and the employer to break the deadlock,” Sema said.

“Workers are not happy with Pikitup’s biometric clock-in system and the lack of consultation in its implementation; want their employer to provide travel arrangements, and are not happy that the management took away the half day off they were given once a month – as a result of overtime work.”

Ntshingila said: “It is operationally ineffective and not cost effective to pick up everyone from home. Also it is not safe for employees to drive drunk. Not for themselves or for the community.”

The Managing Director, Amanda Nair was not at the scene but a statement was released later on the company website expressing her response and disappointment in staff embarking on an illegal strike.

“It is unfortunate that our employees have resorted to an unprotected strike in relation to their grievances. It is a completely unacceptable course of action as it goes against the Labour Relations Act. As Pikitup management, we will not tolerate such disregard for the law and will take swift legal action in dealing with all involved,” said Nair.

“We don’t feel it’s necessary for them to strike as their issues don’t make sense. We’re trying to implement systems that are more efficient,” Ntshingila said.

In SAMWU’s statement Sema disagreed with Ntshingila by stating: “The workers demands are both reasonable and legitimate. Workers should have been consulted on all of the above issues. These are concerns which are affecting their day to day activities.”

Ntshingila said at approximately 11am all strikers were dispersed and sent home by SAMWU representatives. “We are hoping that they will return to work tomorrow morning,” said Ntshingila.

Nair said the most workers should be back at work tomorrow however “Pikitup management is refusing to allow some workers back to their respective workplaces”.