Engineering students give back to Wits Community 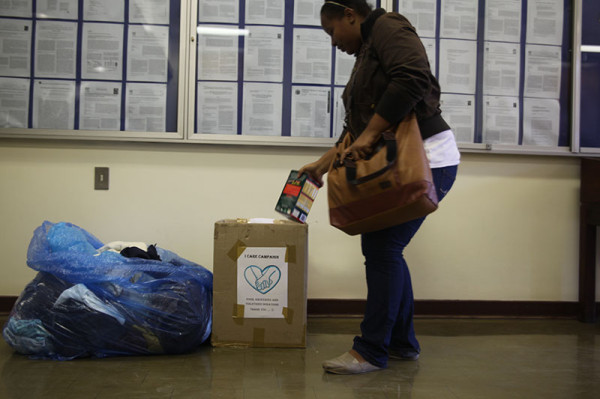 A CAMPAIGN has been launched to encourage Wits engineering students to collect groceries, toiletries and clothes for disadvantaged students on campus.
Wits School of Chemical and Metallurgy student council, known as “Mechsa”, representative Yolanda Kupa , 2nd year Chemical Engineering, was inspired to start the campaign after noticing the work done by other charity drives on campus.

There are a number of collection boxes in various engineering buildings where students can drop off groceries and toiletries. These goods are collected every Friday, to be packed into parcels that are distributed out to disadvantaged students on the campus.

MECHSA student representative Thabani Mbuyisi said that the response to the campaign hasn’t been too bad, but that with a little more marketing, it could be even better.
Mechsa student council president Okaeng Rakereng said engineers were encouraged to give back to the communities where they work. They believe it isn’t enough to go into communities and leave without having made a difference.

With this in mind, the council believed Wits engineering students should get involved in helping others.
“Engineers work for the community [so we need to] enhance responsibilities,” said Mbuyisi.
The campaign seeks to encourage responsibility amongst engineers, whether they are promoting environmental awareness or helping the disadvantaged people within the communities they work.
“It’s a great idea, and it’s a good thing that people are thinking about others and not just themselves,” said Sindi Ndinisa, 3rd year Metallurgy.

Another metallurgy student, Kamogelo Moropa, said the campaign was very impressive and that he hoped it would “inspire other students to follow in their steps”
The Mechsa student council plans to do more community outreach programmes to give back to the Wits and Braamfontein community. They plan on going to Marang house, a facility that cares for children with terminal illnesses, to hold a braai and fun activities for the children at the home.
nomatter@witsvuvuzela.com