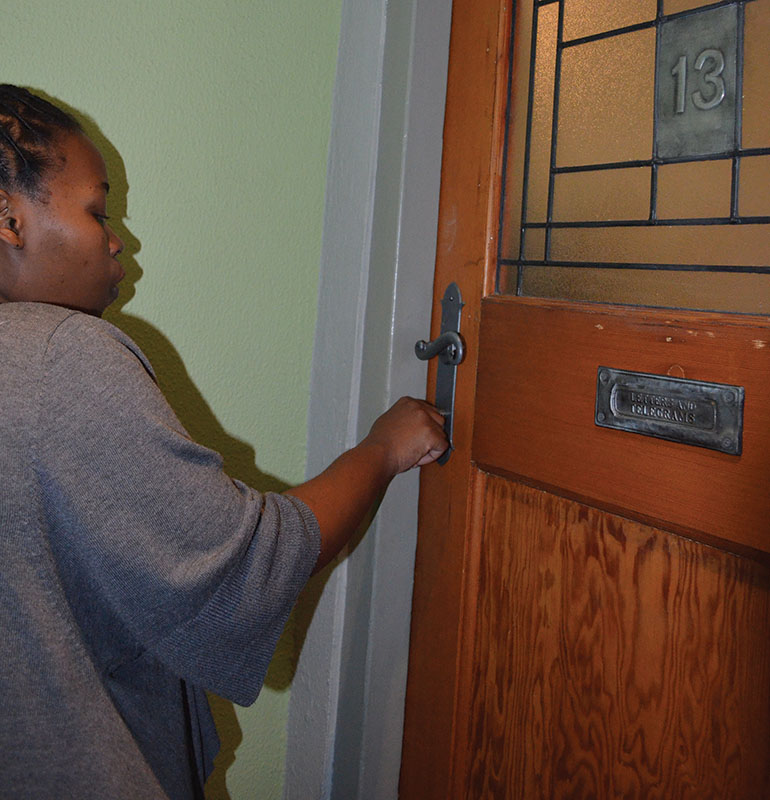 NO ENTRY: A Locked out student couldn’t even fit her key in the keyhole. Photo: Pheladi Sethusa

Thokwadi Seabela had left out mince to defrost. It was 8pm and after a long day at the UJ Law Clinic, she was looking forward to a nice hot meal. But when she reached her South Point flat, she found herself illegally locked out – with no clothes, no food and nowhere to sleep.

The Peppermint House resident and fourth year LLB student at UJ was locked out of her flat in April – with no warning. Although she had paid her rent, South Point administration claimed she was
R8 200 in arrears.

She is not the only one. Lebohang Motaung, 3rd year BSc Chemistry, heard his lock being changed while he was in his Norvic room. He was lucky though. He was able to persuade admin staff to return his key – but only after an angry exchange of words.

It’s a lockout
Seabela found herself in a worse, and certainly more dangerous situation. When she reached her flat, she thought the key would work.She continued struggling with it, thinking she might have used excessive force and broken it.

She went to ask the security guard, who helped put her in touch with “the guy who deals with locks”.“The lock guy just said: ‘It’s a lockout. It means you haven’t paid your rent’. Then he just left.”

After calling around for a place she could stay for the night, she finally got a hold of her cousin, who put her up for the night in Pretoria.

Not a rare occurrence

Motaung said he had seen students forced to sleep in their building foyers, after being locked out of their flats without notice.

He was locked out because the administration claimed his roommate owed R8 000 – despite having only lived in the flat for a week, and having paid a deposit.

Motaung said it was impossible a new tenant could owe so much money. And even if he did, Motaung could not understand why he was being made to pay for his roommate’s error.
“It turned out they had made a mistake on his account and they did not even try to contact him before locking him out.”

When Seabela went to South Point central the day after being locked out, she was told she was late on her January rent payment. She had not even been living in the flat in January.

“When I signed the lease I was told my deposit includes the first month of rent payment, which was in February.”

She had received an inflated statement at the end of March, stating that she owed R8 200. She said alarm bells should have gone off, but she just thought they had included the next month’s statement as well.“A statement doesn’t constitute a notice,” said a visibly upset Seabela.
Former Van De Stel resident, Kelebogile Mothlomedi, said at her building they used to put up a list on the notice board of students in arrears.

“Students then had a week to pay up their rent before being locked out if they failed to do so.”

Alina Starosta, Head of Property and Evictions at the Wits Law Clinic, said: “A lockout constitutes an eviction.”

Lockouts like these were illegal because the landlord had not sought a court order to remove the tenants, she said. However, if tenants defaulted on payments, landlords had every right to evict them.
Starosta said students could sue or lay a complaint with the Rental Housing Tribunal in town. “Students should not let inaccuracies in the statements lie. People often think they can get away with stuff because they’re dealing with students.”

Wits Vuvuzela approached South Point administration, but were told the responsible person was away on holiday and could not be reached for comment.