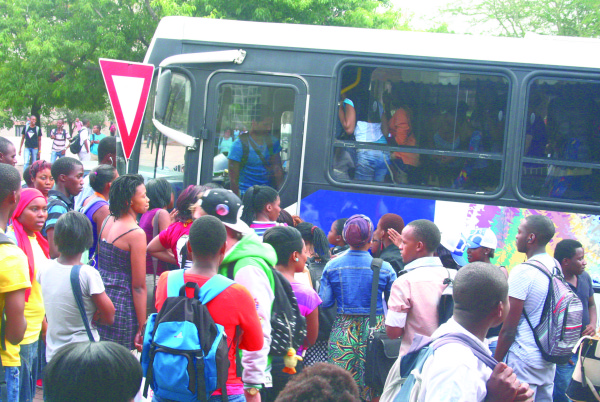 PUSH IT: Anxious students pushing to get a seat on the bus after new no standing rule. Photo by: Nokuthula Manyathi

TWO  Esselen residents were robbed at a bus stop last week. This followed the new no standing rule on Wits buses.
The two women students were left stranded and standing at the bus stop as vulnerable targets for crime as the bus was full.

Wits All Residence Council informed Wits Vuvuzela that two students were robbed last week because of the no standing rule.

Wits services department has introduced the new no standing policy to bring the university’s buses in line with transport regulations.“The regulations were amended by the Department of Transport following the number of fatalities on buses in South Africa in 2012,” said Bus services operations manager Sue-Ann Reed.

“Drivers have been informed not to permit standing passengers on the Wits Inter Campus buses,” said Reed.
Reed also said students who are non-Wits junction residents were not permitted to take the direct Wits junction bus.

Reed said Witsies would not be inconvenienced by these changes, in late 2012 two buses were added and this year a 65 seater bus and two 35 seater buses are now part of the bus routes. Students who live in apartments near Wits Junction have been designated their own ‘bus stop’ on Park Lane street, but some students are still not happy with this arrangement.

Reed said a project manager and two supervisors are on site to monitor the bus stops daily. “Should students have concerns, complaints are investigated to identify the problem and if necessary bus routes and timetables are amended to improve the service,” she said.

The bus services department has also received complaints concerning reckless driving and the lack of wearing seatbelts by the drivers.

Management is looking into complaints

Reed said complaints lodged by students had been discussed with management. “I have advised Luxliner Management of the concern that has been raised by the students and they have confirmed that they have had a meeting with the drivers.

Part of the discussion included the wearing of safety belts which is compulsory.”