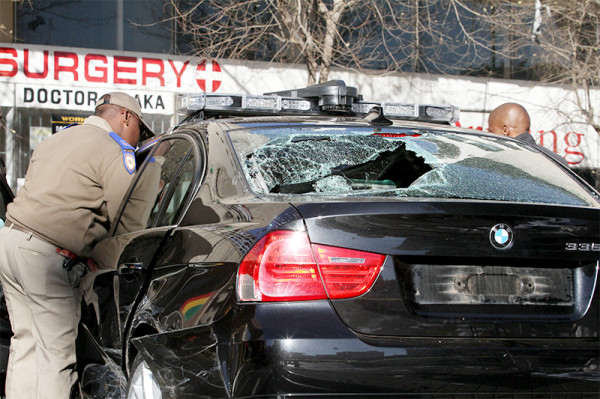 A blue light BMW travelling in convoy through Braamfontein was involved in an accident today resulting in 2 casualties.

According to an eyewitness, the blue light vehicle skipped a red robot and crashed into a white Corolla.  SAPS officers responded to the scene immediately and cordoned off the area with police tape.

An emergency vehicle arrived some minutes later and struggled to remove the driver of the BMW who was not visibly injured but stretched off nonetheless.

According to an EMS paramedic on the scene, the black BMW is “government owned.” The white Corolla belonged to the Department of Labour. The passenger of this vehicle, a middle-aged woman, was also loaded into the same ambulance.

According to eyewitnesses, the BMW spun out of control, destroyed a set of robots and hit the paper trolley of an informal recycler. The recycler ran off after the incident leaving his belongings behind.

In a related incident, a tow truck driver on his way to the accident scene, crashed into a white Honda Jazz.

Onlookers speaking to Wits Vuvuzela expressed their anger at the blue light vehicles which disregard the traffic rules. 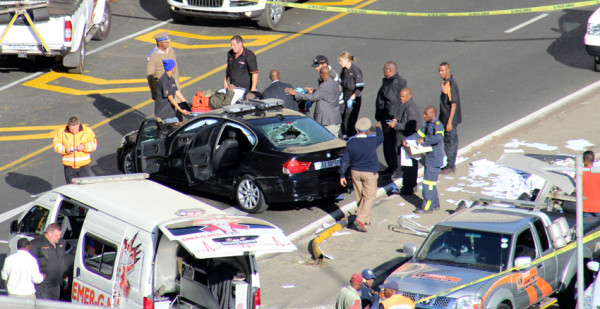 A driver of a Blue Light vehicle is stretchered off after an accident in the CBD. Photo: Dinesh Balliah