ABOUT R40-million was spent to create the popular Wits Arts Museum (WAM) located on the ground floor of University Corner, but burst toilet pipes, power cuts and malfunctioning lifts plague the building’s other occupants.

A pipe in the female toilets burst 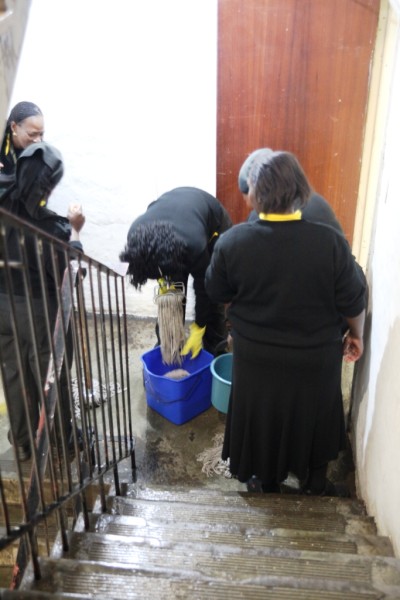 On Tuesday afternoon, University Corner cleaning staff noticed gushing water from the sixth floor as they were getting ready to leave work. A pipe in the female toilets burst and water spilled down from the stairway to the basement floor.
Six cleaning staff members spent more than 40 minutes walking down eight flights of stairs with mops and buckets drying the drenched staircases.

The cleaning staff only finished cleaning up at 4.30pm which was long after their ‘knock off’ time.
Eddy Kekana, technical supervisor for the Property and Infrastructure Management Division (PIMD), said that he was not sure what caused the pipe to burst.  “We did not establish any foul play. It could have been due to the age of the pipe. The building is very old,” said Kekana.

On Monday, the building, situated on the corner of Jorissen and Bertha streets, experienced a power outage from 2pm until 7pm.  The 21-story building is home to many academic departments and programmes affiliated with Wits. The building also houses the Wits Vuvuzela offices and a studio for international news network Al-Jazeera English. The long power outage left people unable to work.

[pullquote align=”right”]We did not establish any foul play[/pullquote] Mike Smurthwaite, station manager at Voice of Wits which broadcasts from the ninth floor, said the station had to broadcast from East campus due to the power cuts. “The electricity went out at 2pm until 7.30pm. We have no generator in the building so we had to move to East campus so that we could carry on with broadcasting,” said Smurthwaite.

Kekana confirmed that the building did not have a generator but could not provide a reason why there was no back-up electricity source. Last month Wits Vuvuzela Online reported that faulty lifts in the building were leaving students, staff and tenants frustrated. Tenants complained about lifts that would go rapidly up and down the various floors without stopping at the selected floors.
Kekana said the lifts were in the process of being fixed. However, the lifts could only be fixed one at a time.
“They are fixing one lift at the moment which will be done in December or January. The other two will be done next year sometime,” said Kekana.