Big five in the posts 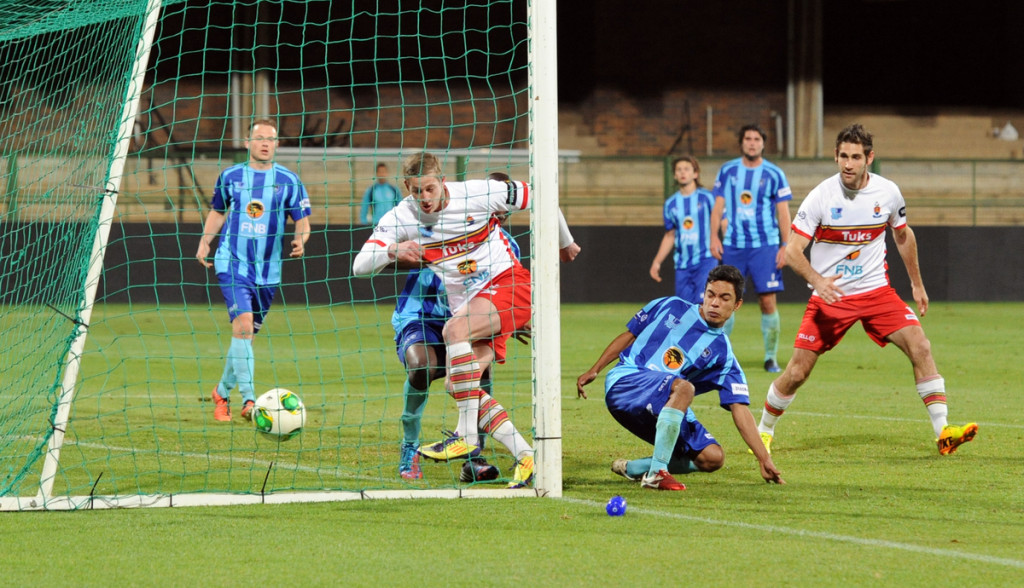 A RESOUNDING defeat on Monday night took away any hopes the University of Cape Town (UCT) team had of moving up from the bottom of the Varsity Football log.

Goal after goal, it became obvious that the University of Pretoria (Tuks) players were not going to let the UCT team squeeze in one redeeming goal for themselves.

The team from the coast were at a slight disadvantage as Tuks played on their home ground, the Ama Tuks Stadium, with their fans cheering them on every step of the way. [pullquote align=”right”]By the 90th minute the outwitted UCT team had watched five flashes of fire go off, signalling five goals at their goalposts[/pullquote]

UCT goalkeeper Bevan Adonis showed some promise in the fifth minute of the game with an impressive diving save. The opening goal by Tuks’s Desmond Khuzwayo was the catalyst that kept Adonis diving and sliding in the goalposts.

Man of the match Dean Wilkinson then scored a clean shot on goal, which made it obvious that Tuks were out to win.

Mbongeni Masilela put his boot in with a third goal.

Keegan Boulle, a reserve put on late in the game, added two more goals to Tuks’s tally. By the 90th minute the outwitted UCT team had watched five flashes of fire go off, signalling five goals at their goalposts.

More disappointment took place on the field closer to home at Milpark Stadium. Wits were beaten by the visiting team from the University of the Western Cape (UWC).

The 2-0 victory pushed the Wits team down to seventh spot on the log after the gains they had made last week with their 1-0 win over UCT.