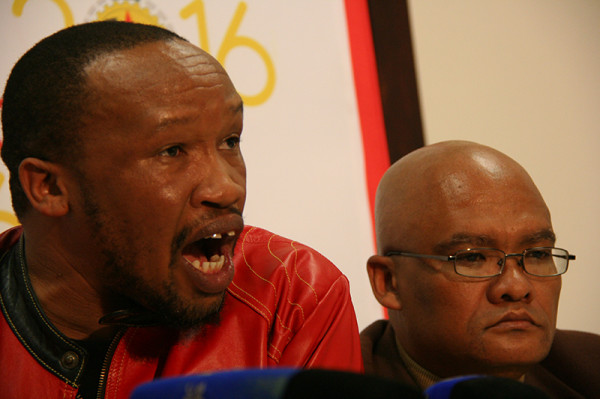 Irvin Jim, general secretary of National Union of Metalworkers of South Africa (Numsa), said there was a political conspiracy to get rid of Zwelinzima Vavi.

“We are of the view that it has become very clear that there is a programme that Zweli’s head must be chopped,” said Jim. He said there were forces within the ANC and the South African Communist Party (SACP) and other sections of Congress of South African Trade Unions (Cosatu) that weren’t interested in matters of the working class and the poor.

Jim said these forces of capitalism wanted to ensure Cosatu embraced the neo-liberal National Development Plan (NDP) reducing Cosatu into a “labour desk of the bourgeoisie”.

Ideological battle between the ANC, Cosatu and Numsa

He said Vavi has become a target of the ANC because he wanted Cosatu to implement the Freedom Charter and has spoken out against the implementation of the NDP.“There is double speak [within the ruling party]. Speaking left but walking right. Vavi has consistently put forward the issues of the working class and the poor,” he said.

Jim said Numsa was worried about the credibility of Cosatu. “We are very worried about the leadership of the federation.[pullquote] there is a programme that Zweli’s head must be chopped[/pullquote] We have lost confidence in comrade Sidumo Dlamini,” he said. He added that Numsa members were “up in arms” about Vavi’s suspension. He told the press they are certain state apparatus and state institutions were centrally involved and used to get rid of proponents of radical thought.

Jim refused to provide evidence of a conspiracy but said everything would unfold in due time. “I am refusing to speak on this thing. I know what has not being reported. When I send an sms, it has been intersected. We thought it was a small thing, we know now it is not a small thing,” he said.

Numsa has rejected the decision of the central executive committee (CEC) to place Vavi on special leave pending investigation and is consulting with their lawyers to over-turn the decision.