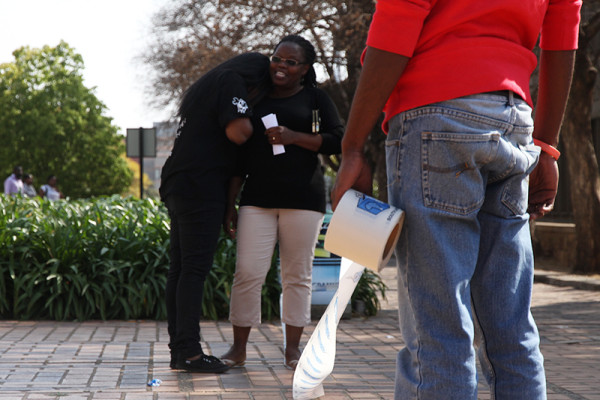 Demarcation tapes were put outside the voting tents to prevent SRC candidates from talking to voters 40 meters within the entrance of the voting station.

“I think they’re imposing themselves on voters,”said  Jabu Mashinini of candidates regularly breaking the 40 meter threshold they are allowed to be from the entrance of voting tents.

Mashinini  is the Chief Electoral Officer during this year’s elections.

“It’s okay they can campaign but they must do it on this side” she said. Mashinini was pointing to the perimeter of blue and white IEC tape she and her team decided to put up to keep candidates on the right side of electoral regulations. SRC candidates who spoke to Wits Vuvuzela about “chance” voters, voters convinced on the spot to vote, mostly defended the use of i-gcebhezana and face-to-face canvassing.

“Some Witsies are just here to study, that’s the niche we focus on. We tell them what we’ve done for them as the PYA and what we’ll continue to for them,” Ngwenya said. 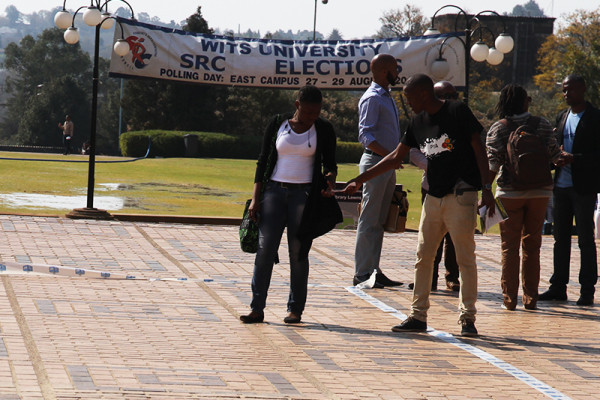 Fellow PYA candidate Michelene Mongae agreed on the importance of talking to students before they went in to vote.

“Some students, we’ll talk to them and they’re like “oh, I can relate to that as a problem,” she said.

Daso candidate Luyolo Mphithi said “this is the most important point in the elections”.  Mphithi said interacting directly with potential voters was important because it made those who weren’t aware of the issues.

“I don’t say vote … I give them a run-down of our policies. I want them to make an informed choice.”

Day 2 of the 2013 SRC elections saw a marginally lower turnout of Witsies coming to cast their votes, as the term winds down and students look forward to the September break and the final semester of the year.

The mundane pace allowed Wits Vuvuzela to observe more closely the different candidates, as they went about convincing students strolling past the voting tent pitched outside the Great Hall stairs.

[pullquote]”i-’gcebhezana”[/pullquote] For some Witsies, that stroll would turn into brisk scamper and eventually a light jog, as they attempted to dodge eager candidates hovering around the voting tent with “i-’gcebhezana” (slips with photographs and candidate numbers of particular party’s candidates)and asking for a “word”.

One anonymous Wistie, who said he would not be voting, even after “enduring” more than 15 minutes listening to a Daso campaigner on why he should, said all the parties were “selling a product I’m not interested in buying”. Chief electoral officer Jabu  Mashinini also had a problem with the campaigning tactics. 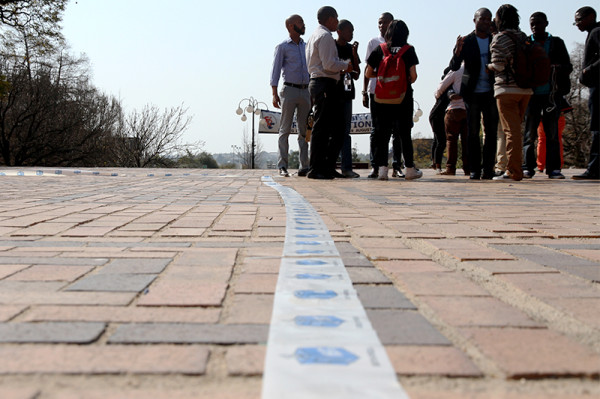