CRICKET: Witsie helps out the Proteas

by The Wits School of Health Sciences 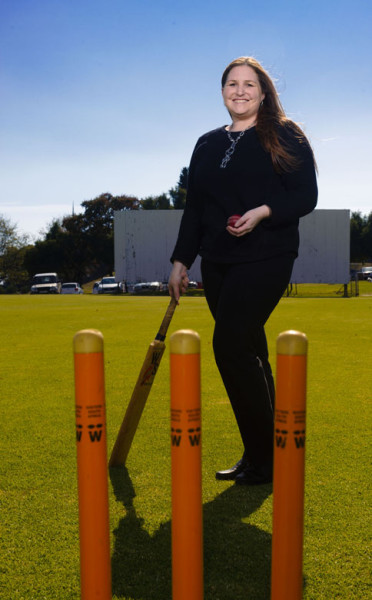 Dr Kerith Aginsky, a professional biokineticist at the Centre for Exercise Science and Sports Medicine, conducted research for South Africa’s national cricket side on a throwing technique that helps cricketers get the ball back to the stumps faster.

‘Our research showed that the time taken to release the ball was quicker, which increases the chance of a run out. The accuracy of throwing the ball at the stumps remained consistent,’ says Aginksy.

In 2012 she tested a technique created by the Proteas’ strength and conditioning coach Rob Walter. The national side started using this technique in 2011 and they wanted to see if research upheld his conviction that it made a difference to the game.

‘The aim of this technique is to keep the fielder much lower to the ground so that after he picks up the ball he throws it back from a lower body position. The rationale is that it takes time to stand up and release the ball, and the time difference between the two techniques is what we researched,’ explains Aginsky. She worked on this research with the South African National Cricket Academy’s strength and conditioning coach Greg King who has a Masters in Sports Science from Rhodes University.

The new technique was aimed at inner ring fielders, within 20 to 30 metres from the stumps. They tested it on approximately 20 National Academy players – the up and coming players who attend an annual training academy for fitness and coaching sessions at the High Performance Centre in Pretoria.

‘We based our results on the high speed camera to capture the greatest accuracy in terms of subtle changes from pick up to release,’ Aginsky explains. The same fielders were tested before and after the intervention, with a two month period between the ‘before’ and ‘after’, during which time King worked with the fielders on the new throwing technique. The arm movement remains the same from the lower position, and the players picked up the new technique quickly and were comfortable using it.

‘We analysed the video footage frame by frame using video analysis software called Dartfish. It’s regularly used as a tool for professional cricket for a number of purposes, including assessing and analysing changes in the game, undertaking two dimensional analyses of bowling techniques and examining harmful bowling techniques,’ explains Aginsky.

‘One frame can certainly make a difference to the game, not only in terms of getting the ball back to the stumps faster but also in terms of putting more psychological pressure on the opposing batsman as to whether he should run or not because the ball is coming back faster.

‘Our research confirmed Walter’s finding that there was a definite decrease in the time taken to release the ball, and an increase in the chance of a run out. The accuracy remained fairly consistent, and the national side is now using the technique readily.’

Aginsky is widely recognised for the work she has done on lower back injuries in cricket players. In September 2012 she presented a workshop on lumbar stabilisation and ultrasound at the first ever Biokinetics Conference in South Africa. At the conference, the Biokinetics Association of Southern Africa named her as the Young Researcher of the Year.

She and King are members of the newly developed Cricket South Africa Research Committee formed in October 2012. The Committee comprises researchers from a number of South African universities who have been involved in cricket or have a specific interest in it. The Chair is Dr Janine Gray, a physiotherapist from the University of Cape Town who focuses on cricket injuries and who supervised Aginsky’s PhD on back pain.

Cricket SA will be driving the research undertaken by the Committee, depending on what is required to improve players’ strength, health and performance. ‘A lot of the cricket research to date has been ad hoc and not used. This initiative will help to ensure that it is far more targeted and, where appropriate, implemented,’ concludes Aginksy.