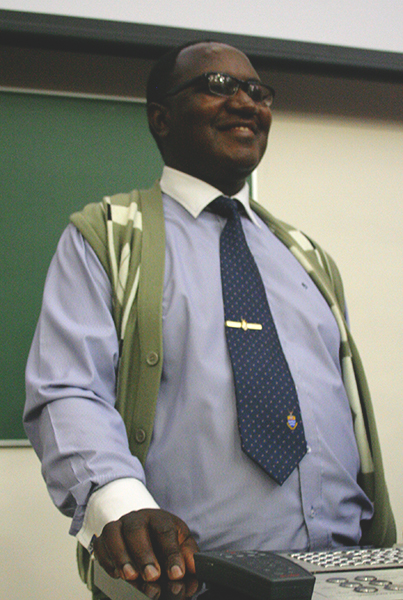 What used to be a conference room inside Campus Control headquarters, Wits’s new security liaison manager, Lucky Khumela, sits behind his desk in the small room, smiling calmly, stroking the shiny, striped tie he is wearing.

“The magic behind that is very simple: appreciation. In the township they get ridiculed and taunted, here in the suburbs you find people who stop to say ‘thanks officer for doing your job’.”

However, ridicule and taunts are not limited to the townships with Wits security guards being the subject of abuse from students and their fellow staff members.

“Personally, I’ve seen how the security guards get ridiculed at the main gate by the so-called students and employees of Wits University. They get shouted at with things like: ‘It’s your job, you are not educated, you need to open the gate for me’,” he said.

Khumela is not fond of bureaucracy. He is quite the opposite, quoting philosopher Edmund Burke and revealing plans to center his approach to sexual violence on the poem “I Got Flowers Today” about a woman who is abused and ultimately killed by her partner.

[pullquote]getting Campus Control officers to “buy into the idea of being an officer that serves his community” [/pullquote]Wits is no stranger to the prescriptive, arms-length approach to an elusive security problem, one that has borne little enthusiasm from the student body. Khumela’s appointment, and the creation of post of liaison manager, represents a welcome change in approach.

“I want to sensitize the security workforce to understand their responsibility to the community and the university,” Khumela said

He pauses to lean back slightly in his chair, as if tossing around the significance of this statement, then adds:

“The two sides need to come together and understand each other’s responsibilities,” Khumela said.

He adds that he is busy assessing what type of training Campus Control officers may need to make this happen.

Beyond training, Khumela reckons it is mutual appreciation, and getting Campus Control officers to “buy into the idea of being an officer that serves his community” that will make the difference in crime prevention.

The qualified domestic violence facilitator says he is also aware of the need for Campus Control to embrace social media to improve communication with students. To this end, Witsies can now tweet   @WitsSecurity to contact Campus Control.