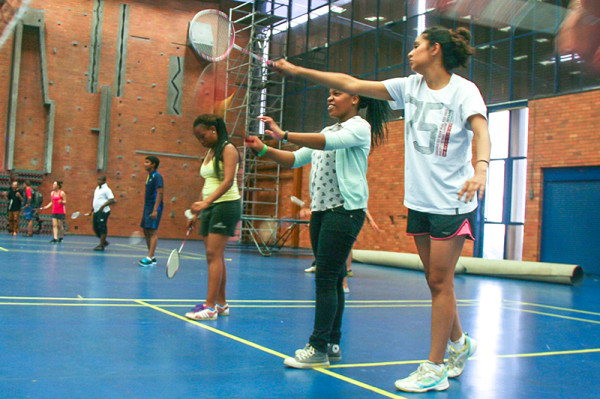 “BADMINTON” is not the easiest word to wrap your tongue around, not quickly and not in front of a group of people looking at you as if you should know – and say – better.
Often it comes out as “Bang-dim-tin”, the appeal of the onomatopoeia too much to resist.

Bad boys
The guys and gals at Wits’ Badminton Society would almost certainly agree though that the sport is more “bad” than “bang”. “Badminton is the fastest racquet sport in the world,” Tashlin Hamid, 2nd year BCom, told Wits Vuvuzela with obvious glee as he flexed his racquet hand.

“Every year the top athletes in the sport test out new racquets… 421km/h was the fastest speed recorded,” Hamid said. The Wits Tennis Society were standing nearby and seemed within earshot as Hamid made his claim that badminton as the best racquet sport. [pullquote]“This year we are on a revival. We’re getting back and the sport is growing[/pullquote]

But the carriers of the bigger racquets offered nothing in their defence.
Maybe it all happened too quickly.
“It’s an all-weather sport, raining, hailing, anything. With tennis you need a big open space.
Badminton is much more sociable,” Hamid said, delivering a kill-shot aimed squarely at badminton’s tennis-playing adversaries.

Fellow badminton player and member of the society, Matthew Michel, 2nd year BSc QS, said badminton, despite its little racquets, could be a bloody sport abound with injuries.
“I’ve seen someone’s knee-cap popping out. There’s a lot of jumping and lunging, it puts a lot of pressure on your knees,” Michel said, reminiscing like a war veteran recalling his wonder years – in this case his years as a provincial badminton player in high school.
The two players however, after seven-plus years of high-speed rallies and knee-crunching lunges in pursuit of the flower-like shuttlecock, are not ready to hang it all up.
“This year we are on a revival. We’re getting back and the sport is growing … It’s a social for now but we will play a few games. “We’ll be cooking and getting people to be good,” Michel said.

The Wits Badminton Society holds practice sessions on Mondays, Wednesdays and Thursdays at 5pm at the Old Mutual Sports Hall.