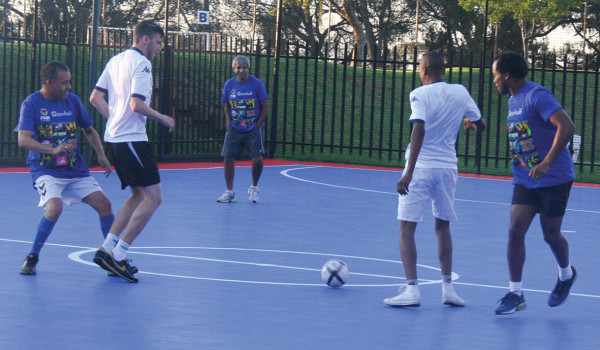 THE VICE Chancellor’s Office and the SRC faced off at Wits University’s first futsal match on Tuesday evening. It was an equally matched struggle which saw an anticlimatic draw.

The SRC played a nine-all draw against Vice Chancellor Adam Habib’s selected team. Deputy Vice Chancellor of Research and Post Graduate Affairs Dr Zeblon Vilakazi impressed not only his teammates but also his opponents with his soccer skills. He alternated from goalkeeper, to midfielder and striker.

Sport Officer Dennis Tshabalala said Futsal “is a 5-a-side game played either indoor or outdoor. The game is played with a low bounce ball.” The duration of the match is a maximum 20 minutes per half.
At first glance, it appeared to be an ill-match, with Habib’s white haired, pot bellied team. The team not only surprised its audiences but their opponents, and indeed, themselves.

The older team was surprised by their own endurance, pace and skills. “Game turning out more even than I thought, guys from their 40’s and 50’s are keeping up,” said Vilakazi.The SRC made more substitutions than their older opponents. This was not an indication of their lack of fitness but a strategy to exhaust their opponents and give all their members an opportunity to play.

[pullquote align=”right”]“We had lots of fun, it’s just a pity we were faced with an opposition we had to take pity on,” SRC treasurer Sandile Ngwenya said. [/pullquote]

SRC Sports Council chairperson, Andrew Keightley-Smith said the launch was not only a way for the SRC to develop relations between themselves, senior management and sporting staff but also to make sport accessible to everyone.
“We wanted to show students futsal is not for people who play competitively but everyone, boys, girls and even staff members” said Keightley-Smith.

The futsal courts, located at West Campus Dig Field were built on donations from the National Lottery fund for over R1-million. Sport officer Dennis Tshabalala said the funds were used on futsal courts because of the variety sporting codes the futsal courts surface can cater for.

“The surface can be a design for other sporting codes; if you look at basketball court, you could do that. That surface you can literally use it for any other form of sport” said Tshabalala.

The courts are a way for people who are not necessarily a part of a sporting team to take part competitively in a fun sport which will be made accessible to everyone.
This was a way for students and the Wits community to keep active and promote a healthy lifestyle.
“Those courts are here simply because we want to grow the game on campus because there are those people who don’t necessarily want to play the normal 11-a-side and this will give them a nice platform to do so,” said Tshabalala
A tournament will officially start on the March 10 and anyone can start a team. Forms and further details can be accessed from Tshabalala at: