Lights out for Witsies

By Roxanne Joseph and Lameez Omarjee 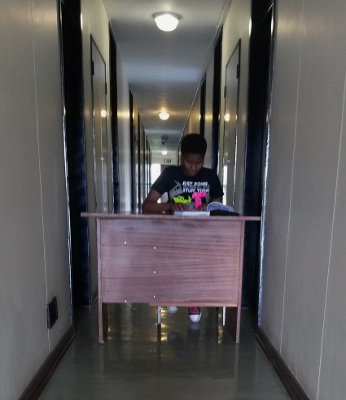 Witsies were left in the dark for nearly four hours yesterday when the first round of load shedding affected large parts of the country.

As part of Block 6 on the City of Johannesburg’s load shedding schedule, the entire campus and surrounding areas were left without power for over four hours. Although accustomed to the process of load shedding, many lecturers and students struggled under the conditions.

[pullquote]Without light in their rooms, students who did not want to make the journey to West Campus in the evening opted to do their work in the res corridors. [/pullquote]

“We were aware of the times because the university had sent out a copy of schedule, so we left campus for about two hours to have lunch”, said Phalo Msila, an associate lecturer in auditing. Commerce, law and management lectures end by lunch time towards the end of the week, leaving only two tutorials after 2pm.

Res students on east campus had to take their study material to west campus when the power went out, from 2pm to 8pm, longer than it had been scheduled for.

Without light in their rooms, students who did not want to make the journey to west campus opted to do their work in the res corridors with some moving a desk into the space to catch some of the light. There are generators in many of the res buildings, but only certain lights in the corridors and foyer come on: individual room lights do not receive generated electricity. Many students felt it was too dangerous to walk across campus by themselves in the dark.

Wits Vuvuzela found Jubilee Hall resident Sibhekiwe Cele, 3rd year BSc Construction Studies, working on an assignment on his computer when the power went out. “It was such an inconvenience to me. I couldn’t finish it.”

Students were eventually forced to eat off campus when the power had not come back on again by dinner time. Rachel Ngidi, 3rd year LLB student and a resident at Trinity House, said it was disturbing, “We had to go out and buy food in the rain … Our phones (batteries) died last night and we couldn’t make calls.”

Unlike day students, res students rely on campus facilities to complete their work after hours.

The load shedding was spread across the city affecting even those students that live off campus.

“I had a chem tutorial that I wanted to finish, but the power was out all the way in Gallo Manor”, complained Ryan Kramer, a 1st year biomedical engineering student.

READ MORE: The load shedding schedule is available on the City of Johannesburg’s website.