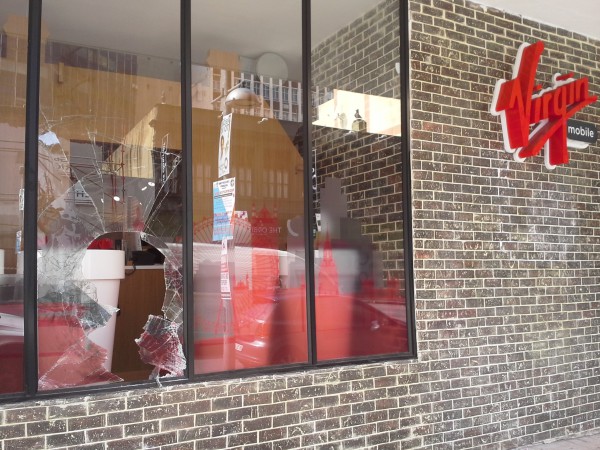 BROKEN GLASS: The window of Braamfontein’s Virgin Mobile was the only sign that the shop had been broken into to early this morning. Photo: Roxanne Joseph

At 4.30am the robbers pulled up to the shop in a vehicle. One of the thieves threatened a security guard while the others smashed the store’s window and took all of the phones on display inside, according to “Shadrack”, a security guard who works in the area.

Shadrack told Wits Vuvuzela he arrived just after the robbery took place and spoke to the security guard who was threatened.

“I think there were three guys, because one drove the car and kept a look out for the police. The other two broke the glass [of the shop window], took everything and when they heard police sirens, they ran,” Shadrack said.

He said this was the shop’s first break-in.

The shop remained closed all morning with bits of shattered glass lying on the pavement outside beneath the smashed window.

Police and the store manager could not immediately give comment to Wits Vuvuzela.

Braamfontein has undergone changes in the last several years as part of the “Braamfontein Regeneration Project” with new shops like Virgin Mobile moving into the area.

The area is  filled with thousands of shoppers on the weekends with the popular Neighbourgoods Market only a block away from the Virgin Mobile where the armed robbery took place.

Shadrack said “there are lots of robberies” on the weekend. He explained that the ATMs attract criminals who offer security guards bribes or distract them to rob people drawing money.

He told Wits Vuvuzela that providing security in the area on the weekend was a “tough job, a very tough job”.

“When this place is filled with people, there’s a lot of theft and if we don’t stop it from happening, they blame us,” he said.