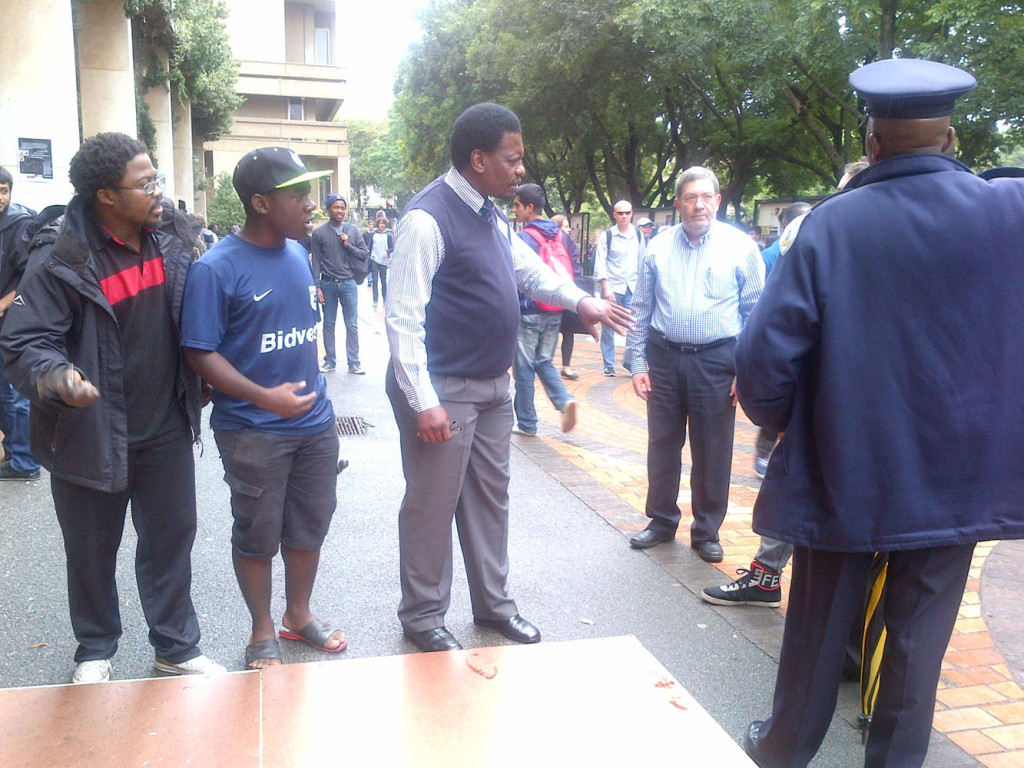 Uyanda Mabece (left) and Ntshembo Vuma were hammering their wooden frame outside the Umthombo Building setting the stage for an argument with a Wits SA Union of Jewish Students member.                        Photo: Nqobile Dludla

A heated argument over loud hammering broke out between pro-Palestinian and pro-Israeli groups on campus Monday, setting the stage for an acrimonious Israel Apartheid Week (IAW).

A pro-Israel, “Give Peace Wings”, event was being held inside Umthombo 2 (U2) lecture hall when hammering sounds were heard outside the venue.

Uyanda Mabece, an executive member of the Wits Palestinian Solidarity Committee (PSC), and Ntshembo Vuma, chair of the Young Communist League, were nailing  wooden frames in preparation for a pro-Palestinian event.

David Isakow, a member of the Wits branch of the South African Union of Jewish Students (SAUJS), was sitting in the Give Peace Wings event and went outside to investigate the noise.

“I went outside to see what was going on. I saw Uyanda from the PSC hammering nails into a wooden frame and also intentionally missing the nails to make noise,” said Isakow.

Isakow said he repeatedly asked Mabece and Vuma to stop making noise or move away from their talk.

“[Mabece] refused to move even after I offered to help him. I said I’d take it further as it’s disturbing our events and they weren’t willing to be helpful,” he continued.

[pullquote align=”right”]Campus control were called in to break up the fracas.[/pullquote]

An Israeli professor of oncology, Prof Yehuda Skornick, was due to deliver a speech on medical science at the Give Peace Wings event. Skornick also went outside to confront Mabece and Vuma.

The fight continued to escalate with Isakow taking out his cellphone to record his argument with Mabece. Campus control were called in to break up the fracas.

Mabece defended the hammering to Wits Vuvuzela and said  lunch hour, when the fight took place, was the only time noise was allowed on campus.

“[Isakow] was very impolite when he spoke to me. We’ve been working and using that space outside Umthombo since yesterday and now that they’re having an event there we must stop what we’re doing?” he said.

According to Mabece, preparations for the first day of IAW began at 6am on Monday morning and were paused during lecture hours with the intention of continuing during lunch.

“This was not a strategic move, it just happened that it was a coincidence,” said Mabece. Prof Skornick was able to deliver his lecture in the same venue after the incident.

In previous years, IAW at Wits has been the scene of bitter arguments, confrontations and protests between pro-Palestinian and pro-Israeli groups.  Just days ago before this year’s IAW began, vice chancellor Adam Habib issued a statement asking for peaceful co-existence between  student groups.

In a related incident, this journalist and a colleague were stopped by the campus control officers from photographing the incident. Look out for the full story in this week’s print edition of the Wits Vuvuzela.