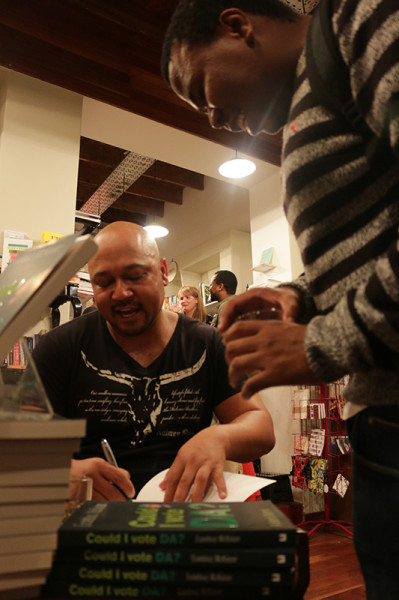 POLITICAL CONFUSION: Talk show host Eusebius McKaiser signs his new book Could I Vote DA? as a reader holds a whiskey and waits in anticipation.

In underground meeting places for the politically homeless you often find young Model C’s  who are victims of schizophrenic politics and old liberals who smell the whiskey before they drink it.

The unofficial voter caucus was held at LoveBooks in Melville on Thursday for the launch of political commentator and radio personality Eusebius McKaiser’s book, aptly called Could I Vote DA?

“Politics are about feelings,” said McKaiser, arguing the decision to vote was primarily based on the emotional association a person has towards political parties, suggesting emotional political baggage was a cause of voter-confusion.

Democratic Alliance (DA) youth leader and moderator for the night, Mbali Ntuli, shocked the audience when she admitted that the party has an emerging culture of silence on race issues. ‘’Helen [Zille] is going to kill me,’’ she said, trying to laugh off the comment.

The mention of the DA leader Helen Zille sparked a conversation about the flaws of the party’s leadership.

According to McKaiser, South African politics is deeply racialised. He said this had a significant bearing on who people voted for and was one of the reasons  the DA has been unable to secure the black vote.

Thabiso Bhengu, a Wits student activist who attended the book launch voiced a different take on the racialisation of politics.

“The DA is a mutation of old whiteness – old devil dressed in different clothes,” Bengu said.

The confused voters are a major preoccupation in Eusebius’ book.

Political journalist Sipho Hlongwane added to the confusion when he was asked whether or not he would vote for the DA. “My vote has better weight if voting for another party besides than the ANC,” Hlongwane said.