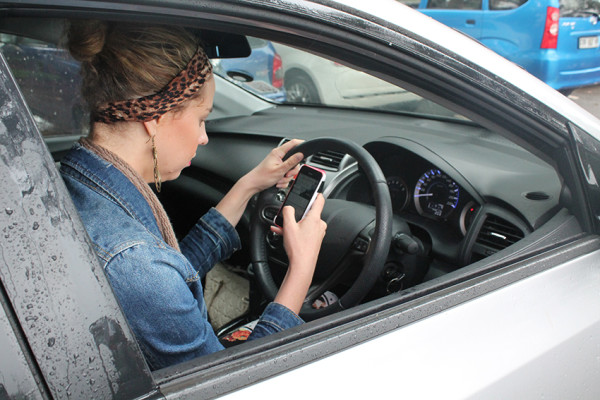 Wits Vuvuzela conducted a snap “car count” for about three hours on Yale Road. We found nineteen out of fifty-three drivers driving through traffic lights and pedestrian crossings without checking for pedestrians because they were using their cell phones.

According to a number of articles in The Independent Online, an increase in users of social networks such as Facebook, Twitter and Instagram has caused an alarming number of people to grow addicted to cellphone use.

People are reportedly unable to get through a few hours without texting, tweeting or accessing Facebook. One of the dangers this poses is to drivers as well as pedestrians.

Campus Control Security and Liaison manager, Lucky Khumela said Yale Road is one of the busiest streets on campus and this phone obsession is “an accident waiting to happen”.

Khumela, a former police officer, said he thinks the high number of “car-related incidents are orchestrated by cell phone use while driving”.

He said cell phones are seldom reported as the cause of an incident as offenders and victims know it is against the law to drive and use a cell phone.

Khumela said most accidents on campus are relatively minor and include bumper bashings, cars reversing out of parking bays or booms closing on vehicles.

“But there have been near misses in the past and it is just a matter of time before a serious accident occurs as a result of driving and texting,” he said.

He made it clear that students crossing roads are sometimes also to blame for the near accidents on campus because they too are on their cell phones and not watching the road when crossing. He also stressed that students must not cross roads at undesignated places because this could be even more dangerous.

“Students must not just cross the road without checking because it is a pedestrian crossing. They must make sure vehicles are slowing or stopping.”

Khumela said Campus Control will propose a plan to fine people driving and texting on campus in the near future.

There are two road safety initiatives currently in place on campus. These are traffic officers who direct traffic on the main roads in the university during peak times and officers who ticket those parked illegally.

Campus Control, together with the SRC, is in the final stages of planning a safety week on campus. Road safety will be a core part of this initiative.