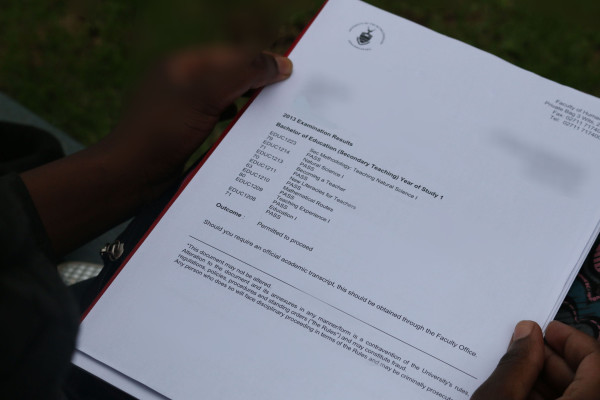 ACADEMIC RESULTS: A student from the School of Education believed that this high aggregate was enough for the Funza Lushaka bursary to be granted. Photo: Bongiwe Tutu

Some of the education students shared their frustrations on the Wits Education Student Council Facebook group page.

“Only less than 20 second year students got Funza, this is not fair,” Gavin Kay Mothopone said. A fellow student, Zandile Zandi Xaba, agreed saying, “Eish this is so not fair yazi”.

A second-year education student, who did not want to be named, told Wits Vuvuzela that she did not understand how she was not granted the bursary this year since her average mark was 72%, a result she believes should have resulted in a bursary.

Not every student can be awarded the bursary

The administrator of the Funza Lushaka bursary, Mfundo Mbatha, said there was little the university could do about the student’s complaints. “The bursary is not ours, it is a government bursary and so the government determines the policy to improve the supply of teachers,” she said.

Prof Graham Hall of the Education school said the Funza Lushaka bursary was intended to address the shortage of teachers in the country and the bursary conditions change every other year due to the demand and supply of teachers. He said that the bursary now prefers students who will teach “foundation phase”–meaning grade zero to three—in an applied African language, as well as those who will teach technology and pure mathematics.

“There are conditions for the bursary and not every student can be awarded it,” Hall said.

Mbatha stated that a lack of funds were a regular problem, “every year I have to attend to re-applicants first and then attend to the new applicants.”

“But there is really nothing we can do as the university, as we take what we get from government and try to assist the students as much as we can,”  Mbatha added.

Mbatha said that students need to understand that the bursary prioritises a high academic performance.  Students disadvantage themselves when they change their majors from what they applied to teach for Funza, within their education degrees. She said that while Wits staff explains the academic curriculum to the board, the final decision on the distribution of the funds was made by government.