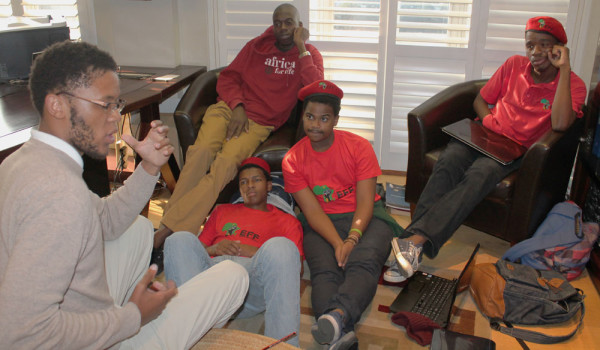 At 4.30 pm this afternoon, Wits Vuvuzela saw six students in their red EFF t-shirts and berets  seated in the entrance to Habib’s office. The vice chancellor was not in the office as he is out of town.

“The VC is the office bearer, we are here to occupy the office, the space… the university cannot go on as usual as if nothing has happened,” said Wits EFF chair Vuyani Pambo.

The EFF protestors intend to eat, sleep and study in the office until they are recognised as an official society at Wits.

“We will be an official structure at Wits … We already exist in the hearts and minds of students, we just want to make things easier organisationally,” Pambo said.

The protestors have already spoken to Prof Tawana Kupe, the deputy vice chancellor of finance, who Pambo claimed “basically conceded that an unjust process has taken place … The correct procedure was not followed.”

Wits EFF’s application to be a club and society was rejected by the Student Representative Council, which is led by the Progressive Youth Alliance (PYA), because it was submitted late. Wits EFF claim the application was rejected for political reasons.

“I suppose they are scared, the PYA run SRC that is,” said Pambo.  “The corrupt SRC will not stop us.”

“It comes down to Wits’ political intolerance. This time last year, Pasma (Pan Africanist Student Movement of Azania) were also denied recognition … We will not let that happen to the EFF,” said Monwabisi Dlangana, a member of Wits EFF.

As of Wednesday afternoon, only a handful of Wits EFF members had occupied the office. Pambo said they did not plan on filling the vice-chancellor’s office completely but would still escalate the protest.

“The numbers are there, but we don’t want to fill this place … This protest can escalate in other creative ways,” Pambo said.