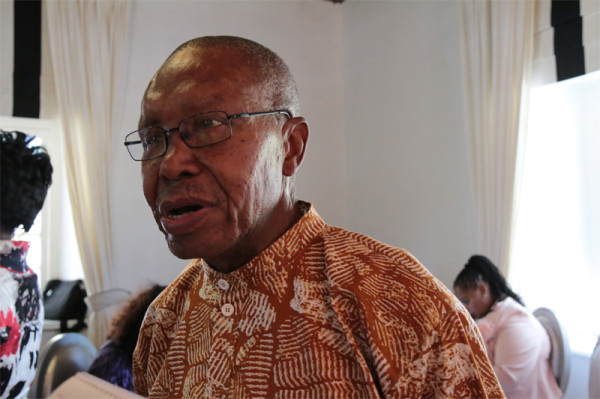 A WONDERFUL AND WELL-DESERVED HONOUR: Joseph Thloloe, a respected South African journalist, received his honourary doctorate from Wits University on April 3, 2014. He is pictured here at a celebratory lunch. Photo: Luke Matthews

Growing up on the dusty streets of Orlando East, Joseph Nong Thloloe never imagined himself standing on the stage of one of South Africa’s most prestigious academic institutions.

Known to many as Joe, Thloloe, one of SA’s most respected journalists, was awarded his honourary doctorate by Wits University earlier today.

“It is very humbling being recognised for the small decisions I’ve made throughout my life,” said a clearly-emotional Thloloe.
In his speech at the graduation ceremony in the Wits Great Hall Thloloe said, “Even in my wildest imagination, I never conjured up a moment like this, where the University of the Witwatersrand would honour me”.

“Today’s scene wasn’t in my mind as I was growing up in the dust of Orlando East … it wasn’t there as I languished in police cells and nursed tortured body and soul after police interrogations”.

Thloloe went on to thank Wits for the honour and congratulated the graduands of 2014, inspiring them to “celebrate … and prepare to move on to even greater heights”.

The Wits Journalism department nominated Thloloe for the honourary degree, noting in their nomination that he has “worked tirelessly from his teenage years for the general betterment of his community, for political change and for socially responsible journalism”.

Thloloe absolutely deserving of the recognition

The nomination also hailed Thloloe “for his role in campaigning against apartheid, a principled non-violent stance that he held to staunchly” and his position as a senior editorial member of the Sowetan, where he was “instrumental … in promoting alternative and public forms of citizenship and nation building among black South Africans”.

According to Nita Lawton-Misra, Wits acting registrar, Thloloe was awarded his “Doctor of Literature for his valuable contribution to South African society in the field of journalism”.

[pullquote]”I think he’s a fine role model for the kind of commitment and courage that we hope to cultivate in students”.[/pullquote]

“Joe absolutely deserves the recognition, but from the point of view of our department, I think he’s a fine role model for the kind of commitment and courage that we hope to cultivate in students”.

Nooshin Erfani-Ghadimi, project coordinator of Wits Justice Project, believes, “The more we move away from 1994, the more we forget what people like Joe went through”.

“He’s a stalwart and really someone to look up to”, said Erfani-Ghadimi.