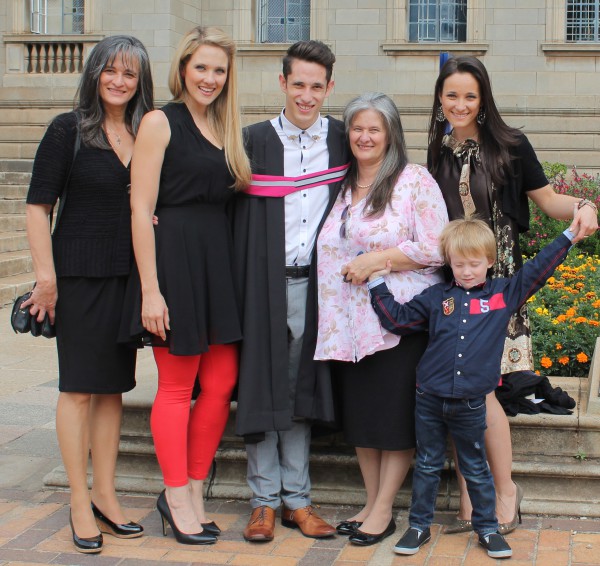 When Michael Constantinides enrolled for his Bachelor of Architectural Studies at Wits at the age of 17, little did he know of all the triumphs and challenges that awaited him.

Now aged 20 and one of the youngest students in his class to graduate, Constantinides said he felt a sense of “relief” at today’s graduation ceremony.

“There were lots of struggles throughout the three years,” said Constantinides. His father suffers from a chronic illness and over the past few years, Constantinides has seen his condition deteriorate, which has “been difficult on the whole family”.

His final year was particularly difficult. Constantinides was dealt another personal blow when his mother suffered a heart attack during his mid-year exams.

Catherine, Constantinides’ oldest sister, had to drop her law studies at Wits due to financial difficulties. She then started her own company and ensured that her younger sister, Elaine, and Constantinides received an education at Wits.

A family of inspiration

“My older sister, Catherine, has been my biggest influence,” said a clearly passionate Constantinides. “She has achieved so much in her life and is still so young. Every year she achieves higher goals and it motivates me to do the same.”

[pullquote]“I get a lot of the motivation and inspiration from my family. They’ve motivated me to do big things.”[/pullquote]

“In any family, you’ve got to pull together no matter what the situation, because that’s how you show each other love and respect. I can’t wait [for Michael’s future] because there’s more to come.”

Constantinides echoes his sister’s sentiments. “I get a lot of the motivation and inspiration from my family. They’ve motivated me to do big things. Architecture is a very difficult degree”.

A heart for art

Knowing that he was younger and could get his degree at 20 was a big motivation for him.

“It’s an amazing feeling. A lot of people can’t study or drop out or don’t have the motivation. I’m very humbled to receive a degree. All the hard times, late nights and struggles were worth it,” said Constantinides.

“I absolutely enjoy making an artwork that people can live in and move through”.

Constantinides is currently completing an internship. He is also an entrepreneur with his own accessory business and was the founder of the Wits Generation Earth environmental society in 2011.