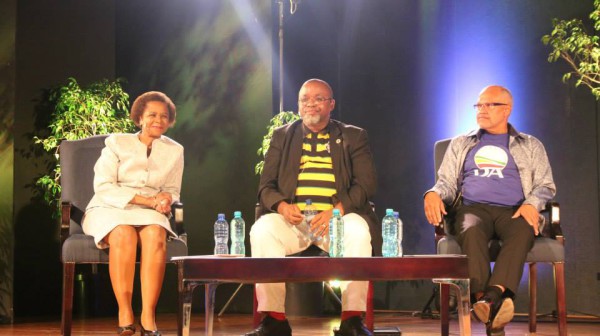 If last night’s election debate at Wits is anything to go by, this election period will be dominated by Nkandla-talk.

Wits University hosted the first in a series of pre-election debates together with eNCA and Independent newspapers just weeks before South Africans head to the polls. Last night’s panel included Agang’s Mamphela Ramphele, Wilmot James from the DA and the ANC’s Gwede Mantashe.

[pullquote] “Nkandla was not built with state money”[/pullquote]

“Nkandla was not built with state money,” declared Gwede Mantashe who went on the defensive after an audience member asked if the Nkandla saga ruined the image of the ruling party.

When asked to “be honest” about what the Nkandla report did to the image of the organisation, Mantashe evaded a direct answer and instead quoted from the report. Ramphele urged him to give a direct answer, saying, “the question asked is not about the report.”

In response, the crowd booed and shouted over Mantashe’s voice as he spoke.

Ramphele dominated the debate with a strong focus on the education policies of her fledgling party.

“Today’s education is good for those who can afford to go to schools where you pay”. Ramphele added that her party aimed to provide free quality education for all.

The DA admitted that race is still an issue in the country, but their focus is job creation. “It’s not about giving jobs to allies,” James said.

A panel of Wits experts, which included Wits VC, Professor Adam Habib and head of the politics department Professor Daniel Glaser also participated in the debate.

Next week the debate series will continue with  Floyd Shivambu from the EFF, Lindiwe Mazibuko from the DA as well as the Fikile Mbalula from the ANC.