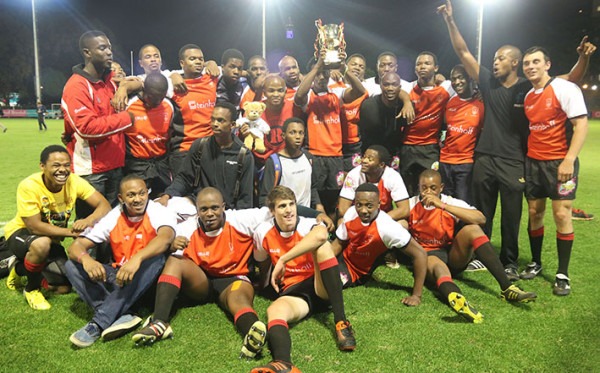 The Wits internal rugby league got off to a trying start on Wednesday.

Knockando and Humanities supporters left after both of their teams didn’t pitch up for their matches.

“Knockando thought their game only started at 8.30pm and Humanities said they didn’t know they were starting this week,” said Masakhane player Junior Mnisi.

Despite the delayed kick-off, Masakhane thrashed the Engineers in a 38 – 0 win. The SA Union of Jewish Students team and Commerce wound up playing each other after their opponents didn’t pitch up. Commerce won that match 36 -24.

Despite the confusion, the cool night and the 90 minute delay in starting the match, the fans who caught on took to the stands excitedly and not a little rowdy.

The loudest bunch were the fans from Men’s res, who cheered and stamped through their team’s victory, 24-18, over Monash.

As soon as Men’s res won, their fans emptied the bleachers and rushed onto the field with singing and cheering.

The Men’s residence fans formed up in a circle on the field and posed for pictures, bringing the first night of amateur rugby to a close.

The Humanities team won the Wits Internal League last season and competed in the Varsity Cup Koshuis tournament. A new season and the title are all up for grabs again.