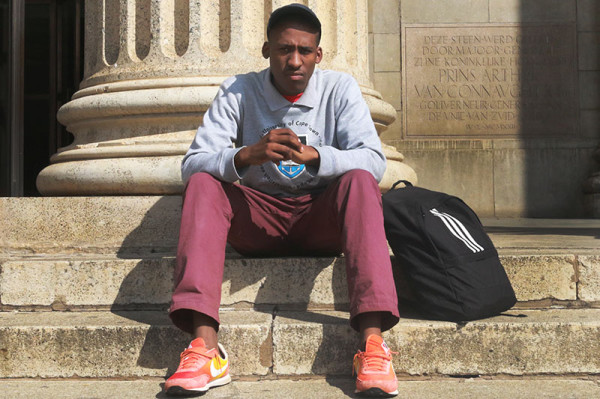 STRUGGLE TO SURVIVE: Ontiretse Phetlhu, a former UCT student, is struggling to adapt to the Joburg lifestyle and to support himself financially. Photo: Thabile Manala

Ontiretse Phetlhu is sometimes barely able to feed himself, lives in a shanty back room and struggles with life in Joburg, his new home. But he’s a Witsie, studying to be a teacher, and his story is typical of students who hail from financially disadvantaged backgrounds and who have to juggle academic commitments with long working hours to support themselves.

[pullquote]“I have already accepted that things may not go well … I haven’t established a formula, I haven’t found my ground at Wits.” [/pullquote]

Phetlhu is a former UCT  (University of Cape Town), student who has moved to Joburg to pursue a Bachelor of Education degree. He was previously a NSFAS (National Student Financial Aid Scheme) student and, with help from his mother, is supporting himself while paying back his loan.

While Phetlhu’s mother managed to pay the upfront registration fee from her savings  this year,  she is unable to finance his day-to-day living expenses. He previously lived in Randfontein with relatives and traveled to campus by train. But unreliable trains meant that Phetlhu was often late for morning classes.

He now rents a small room in Thokoza, but he is by no means self-sufficient and is barely able to survive because he is often without a cent in his pocket.

Both his parents have low-income jobs and are unable to assist him.

When Phetlhu appealed to the Wits accommodation office for assistance, he was told that without funding there is nothing they can do for him and that his points, (according to the university’s point system), did not qualify him for a place in res. No other options were available to him. He later turned to the SRC (Students Representatives Council) with no success. “I don’t find them helpful because their availability is questionable … these are urgent matters,” he says.

Jabulile Mabuza, Campus Services Officer of the SRC, said the SRC has a limited budget.  It is divided between helping the clubs and societies further their mandate to keep university life vibrant and the Humanitarian Awards used to help students. “The SRC prioritises a larger group of people who need funding to fill in the gaps than one person who needs complete funding”, said Mabuza. She encourages students to seek external funding.

Enid Schutte, a psychology lecturer at Wits, said students from a low socio-economic background are often under pressure to achieve. These students are sometimes the first in their families to make it to university and therefore “[their] anxiety levels are high”. Schutte said these students are able to get toiletry packs and food packs from the dean of students on a completely anonymous basis.

As a first time Joburger, Phetlhu also faces socio-cultural difficulties. He says: “I feel lost in this place, it’s quite sad because where I’m from, I had a support system.” The psychological burden of living in these conditions has affected his academic performance.

Phetlhu, once filled with optimism, now says: “I have already accepted that things may not go well … I haven’t established a formula, I haven’t found my ground at Wits “.