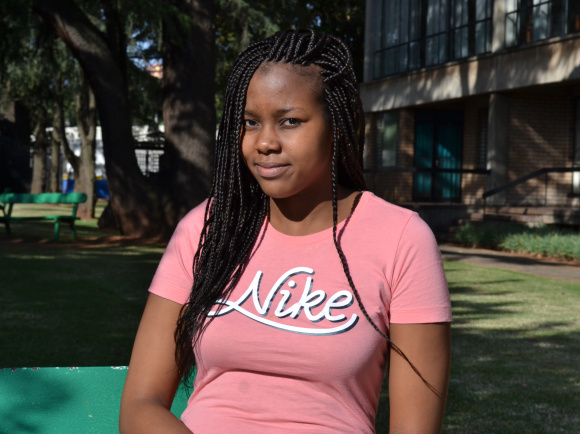 BIRTHDAY GIRL: Lodi Mothiba believes South Africans should not dwell on the past.
Photo: Lameez Omarjee

Lodi Mothiba was born into a democracy, April 27, 1994. Like every other young adult who grew up in post-Apartheid South Africa, this 20 year old was granted freedom and has never experienced the level of oppression previous generations endured during Apartheid.

Mothiba grew up in Polokwane, Limpopo.  She is the eldest of three children.  She had to overcome tragedy with the loss of her father during her preliminary matric exams in 2012. “Trial was the hardest thing on the planet… Trial was horrible.” She tried not to think about it too much and managed to matriculate with distinctions at the end of the year.

She received a partial bursary from PWC and will complete her articles after she qualifies with her BAccSci degree. Currently she is studying at Wits and hopes to achieve her dream of becoming a chartered accountant one day.

Mothiba has an interest in drama and enjoys reading, riding her bike and swimming, “I’m one of the few black people that enjoys swimming,” she joked.

She agreed to be interviewed to highlight her views on democracy, as a born-free.

When you were growing up, were you conscious of the significance of your birthday?

I don’t think it matters. I didn’t think of it as the day black people were allowed to vote for the first time, for me it was just my birthday.

Did you have a diverse group of friends?

Yes definitely, my best friend was white. My whole range of friends were just like the rainbow nation.

Do you notice colour?

No, not at all… Well I notice it, of course you definitely notice it.  But it doesn’t faze me at all.

What about the guys you date?

No, not even hey. I haven’t dated a guy that’s not black, come to think of it. But I don’t mind. I think white guys are really hot, honestly, I do. I’d date a white guy.

What are some of the frustrating things about our democracy, what should be done?

I don’t know if something can be done. I didn’t even register to vote. Because when you vote for someone you believe that they are in a position of trust. Our political parties are not adequate, there’s too much corruption. I don’t think I can vote for anyone. Even if I registered to vote, it would have just been an obligation to me.

Don’t you think people judge you for that?

They do, they definitely do. They say, “You’re a citizen. You shouldn’t complain.” But I won’t complain. When I look at these parties, I don’t know who to turn to. You vote for someone you believe will hold the country together, you trust them to do something good.

Do you think you are being irresponsible by not voting?

I feel like it is irresponsible. I guess it’s a good thing to vote because it shows that you care about your country.   But I don’t know, I still think even if I registered, I still would not have gone to vote. A lot of my friends didn’t register to vote either. There’s nothing pushing me to go.

Do you think many people born post-apartheid are indifferent about our democracy?

Yes, I think a lot of us are indifferent. My friends really just don’t care. We don’t think so much about what happened in the past. I don’t know if it should affect us though. I think we should move on. I know people like saying you have to know where you come from to know where you going.

What about the argument that we need to redress the wrongs of the past? Can we move on without redressing those wrongs?

Yes, we should redress the wrongs of the past. I guess it makes sense to look at the past and see the mistakes that we made and fix them. But dwelling on the past, that’s what I’m against.   People blame many things on apartheid.

What is your worst stereotype?

A stereotype that I hate, that we all have even if we don’t say it, and I feel bad for saying it now; but if there is a white lecturer or a black lecturer- I’d rather have a white lecturer. It happens though. It does. We’ve been programmed in our heads to think white is superior and it’s horrible.

What message do you want to give older people about the born free generation?

What kind of democracy do you want for South Africa?

A democracy where the people actually have a voice and one where there is lessened corruption or no corruption at all. We should care more often. I’m going against what I’ve done, but we should at least register to vote and show that we care. We should show some interest in your country, and not be indifferent.

We should be more patriotic. We can’t just be about this brain drain life, where we study here and then just leave and go overseas. We will always complain that South Africa is not developing right but who do we expect to develop it if we are not the ones taking a stance and actually doing something about it.