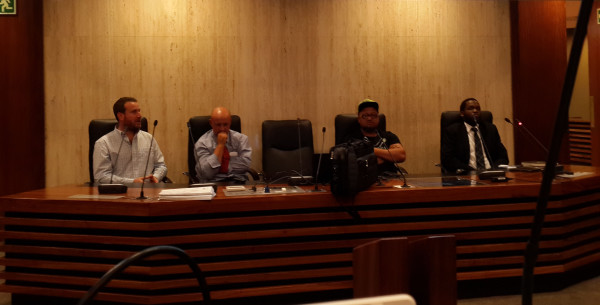 The 20 year anniversary of democracy in South Africa came under the spotlight last night with a panel discussion hosted at Wits University.

The “South Africa’s democracy turns 20 … and?” talk included Frans Cronje from the Institute for Race Relations (IRR), talk show host Eusebius McKaiser and journalist Paul Berkowitz, all of whom were generally optimistic about how far the country has come in twenty years.

Cronje said “South Africans in 1985, would never have dreamed that a decade later, the ANC would be unbanned, interest rates would be halved,” and “we would be rebuilding the country.”

“If we go back to where it was … we have achieved more successes than we could have ever hoped for,” he said.

McKaiser echoed these sentiments and emphasised that “if we look at the bigger picture, there are many criteria we can judge democracy by – substantial free and fair elections, an independent media and constitutional supremacy.”

Questions about “voter education” and the leadership crisis in South Africa dominated discussions.

Cronje said we should “empower voters” but to entrench voter education within them “is a dangerous idea”.

“Voters are much better off making their own mistakes than becoming too informed,” he said.

Berkowitz addressed the leadership question and said he believes “our system is flawed” but South Africa does have the capability “to grow strong leaders and mentors.”

McKaizer encouraged students to vote and “not out of moral duty but for selfish reasons”.

“We may as well choose the bastards who will be exercising power and implementing law,” he said.