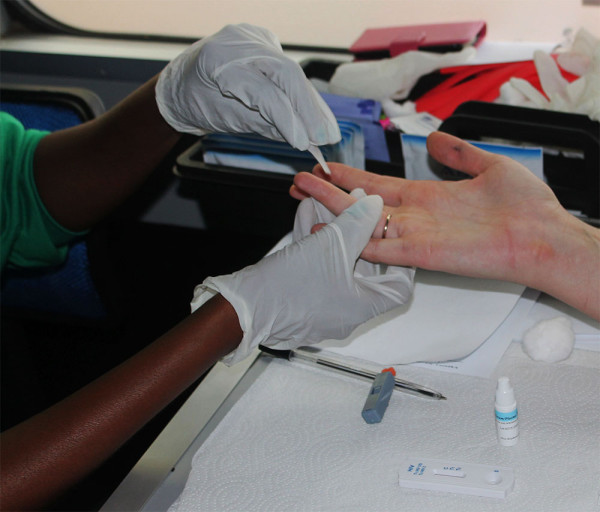 Dedicating their lives to the health and well-being of their patients comes at a great personal and health risk for students in the Faculty of Health Sciences.

With the prevalence of HIV in South Africa, exposure to HIV-positive patients is an everyday occurrence for students in the medical field.

Wits Vuvuzela recently spoke to a number of health sciences students who have had to go on antiretroviral medication (ARVs) after accidents – such as needle stick injuries – have occurred.

Krystle Moodley, a Wits dentistry graduate who is currently doing her community service year, has been on ARVs twice. Her first time was in fourth year when she got a needle stick injury.

“I was unscrewing the needle from the syringe and the cap fell off and I got pricked,” explained Moodley. She is currently on ARVs for a recent scare she had while cleaning a dry socket – a condition that develops after a patient’s tooth has been extracted.

The side-effects she is presently experiencing from the ARVs include nausea and vomiting. Moodley adds she has heard of people who stop taking the ARVs because of the side-effects, which can include fatigue, migraines, loss of appetite and diarrhoea.

“I [would] rather suffer a month than my whole life personally (sic),” says Moodley.

A sixth year MBBCh student, who has chosen to remain anonymous, went on ARVs in 2012. Describing her experience, the student said it was “terrible” and “horrible”.

“You think it’s just taking your ARVs, but it’s an emotional thing … It’s just really a heart-wrenching experience. You feel like you’ll be stigmatised. It was literally the worst three weeks [taking ARVs] of my life”.

Stacey Fourie, 6th year MBBCh, has, like Moodley, been on ARVs twice. Both incidents occurred in the early hours of the morning while she was stitching trauma patients.

Fourie describes the second incident where she was stitching a man who had been stabbed all over with a broken bottle. She stitched him for three hours without a break and due to sheer exhaustion; she tried to re-cap a needle and pricked herself. The man was HIV positive.

While on the ARVs, Fourie experienced severe fatigue and struggled to study because of this.

Fourie said anybody would be “very hard-pressed to find an intern (a doctor-in-training) who hasn’t been on ARVs at some stage”.

Muhammed Makda, another sixth-year MBBCh student, describes his 28-day ARV experience as both depressing and emotional. Makda was accidentally pricked by a doctor performing a lumbar puncture on an HIV-positive patient.

Makda was on one of the “older ARV regiments” and, as a result, he suffered from severe fatigue and lethargy for the entire 28 days. He said his body felt quite weak and he experienced severe nausea which was worse in the mornings when he would occasionally experience vomiting.

He says that although “the risk of contracting HIV through this kind of exposure (needle-stick injuries etc.) is [statistically] minimal, one cannot truly rest at ease knowing that it is still possible and may just happen to you”.

Another sixth-year medical student, who hasn’t been on ARVs, said that as a medical doctor living in South Africa, there is a “very real danger that one morning you might wake up HIV free (sic), go to hospital and come back HIV positive”. He says he finds this “really scary” and with being tired, overworked and hungry, the ability to concentrate and work cautiously becomes difficult.

Makda said students who have had an HIV scare need to make the decision to go on ARVs “fast”, as the sooner one takes them, the less the chance of infection.

When asked if the threat of HIV has made them think twice about their choice of their profession, the students interviewed all echoed the same sentiments. They love what they do and as Moodley said, “I love seeing the smile on my patients’ faces, and that is reward enough”.