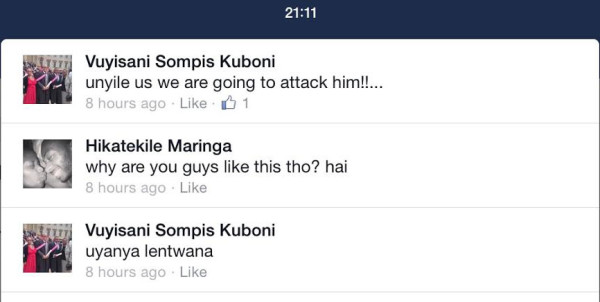 SRC member Jamie Mighti has accused fellow council members and leaders of the Progressive Youth Alliance (PYA) of threatening to “attack” and “klap” him.

“He stated that they would ‘attack me’ and in addition, in a vernacular language, stated that I would ‘shit myself’.”

Mighti said he received the “threats” pertaining to his political views and opinions via social media earlier this year. He then blocked SRC clubs and societies officer Sarah Mokwebo onTwitter who he said had made some of the threats.

Fellow SRC member Vuyisani Kuboni commented on her status update “unyile [he is going to shit himself] us are going to attack him!!…”

Mokwebo said her Facebook and Twitter profiles were her “personal accounts” and had nothing to do with the SRC. She refused to comment further to Wits Vuvuzela explaining, “I have nothing to say to you people”. Kuboni could not be reached for comment on the alleged threats.

“He stated that they would ‘attack me’ and in addition, in a vernacular language, stated that I would ‘shit myself’’,” said Mighti. He said that he approached Mokwebo and Kuboni for an explanation but they did not respond.

Godfrey Maja, a member of the PYA, also attacked Mighti over Twitter. “…where your actions dictate that a good klap be deployed. Yes it’s fine to not only threaten but deliver too!”

According to Zambian-born Mighti, the attacks on him were “xenophobic rhetoric”. Mighti said he was concerned the SRC will not be able to “conduct ourselves as student activists in the political space while we continue to receive explicit threats from rival organisations.”

But Maja criticised Mighti’s claims of threats and victimhood calling them a “political tool”.

“A game is when u make your safety a political tool to gain sympathy. We know ur tricks. U will fool children,” Maja said on Twitter.

On Tuesday, Mighti contacted Vice Chancellor Adam Habib, Dean of Students Pamela Dube and Deputy Vice Chancellor, Tawana Kupe complaining about the situation and asked them to “take immediate and decisive action to ensure the safety of students in the political space and to deal with those who see it fit to threat, intimidate and harass their political opponents.”