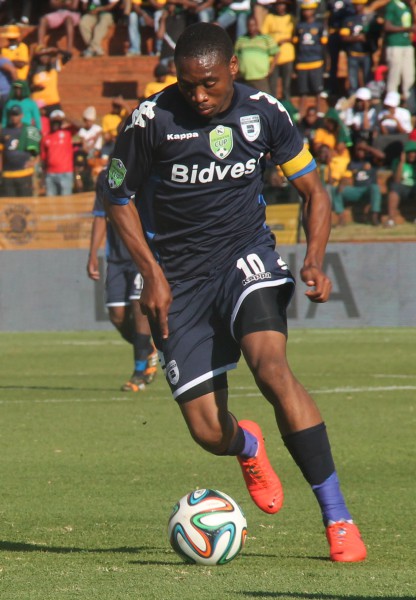 Sibusiso Vilakazi could finish this weekend with a cupboard-full of silverware and a cheque for R7-million for his team.

The captain of Bidvest Wits will lead his team in the Nedbank Cup final against Orlando Pirates on Saturday, and on Sunday, could walk away with any of 3 awards at the annual Premier Soccer League (PSL) awards.

The 24-year-old Soweto-born midfielder debuted for Wits in the 2009/2010 season after being groomed by the Bidvest Wits academy.

He has since notched up over 100 first-team appearances and been rewarded with the club’s captaincy and two national team caps for South Africa.

Vilakazi’s performance has attracted some interest from Brondby in Denmark and the Clever Boys captain may be jetting overseas by the beginning of next season.

According to Vilakazi, he spent a week in Denmark on trial and a transfer there looks likely. Vilakazi has spent the last 5 years of his professional career with the Clever Boys and has no regrets.

“So far it has been great. I have worked through step by step, baby steps as well. I hope I can grow better and better.”

With an exciting weekend ahead for the Clever Boys captain, he said, “I’m hoping it will start with the cup final and we will see what happens with the awards but I’m hoping we lift the trophy.”

The Nedbank Cup final at the Moses Mabhida Stadium in Durban, on Saturday afternoon, will be a tightly contested match if the draw in their last meeting is anything to go by. Bidvest Wits coach Gavin Hunt said, “Winning the cup will define if the season is good or bad.”

Vilakazi will no doubt play a vital role in the clash on Saturday afternoon and said, “It comes down to that important day, what happened in the past doesn’t matter, we focus on what’s happening now.”

Vilakazi said that his team deserves at least one trophy for the season. He would be lifting the trophy as captain if they win and he added,” I believe in my team and each and every individual.”